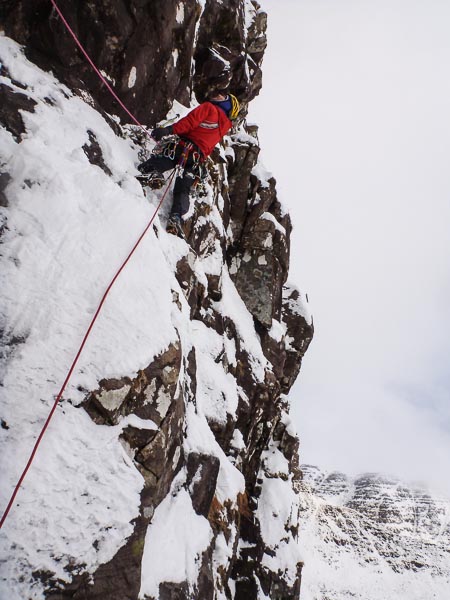 “After getting wind blasted on Beinn Eighes’s summit plateau last Saturday I was keen to climb out of the wind when Simon Yearsley and I went out on Tuesday. There had been huge dumps in the east and the southwest, but other places seemed quite bare.  We had an inkling that the left side of Corrie na Poite on Bheinn Bhann might be tucked in far enough to be protected from the wind. But would it be wintery enough? Beinn Bhan reports from the previous few days were mixed:  The Godfather wall was black, but Silver Tear was formed, some places were snowy, but others he been blown back to bare turf.

Simon and I keep getting drawn back to the huge wall between March Hare’s and Mad Hatter’s. Its height is part of the appeal, and the setting is peerless, but it’s the quality of the climbing in the steep bands that clinches it.  So, guided more by our hearts than our heads, we pointed the camper van north to Applecross.  Light snow began to fall was we passed through Achnasheen.

Dawn broke as we crested the corrie rim:  we were in luck. The buttress was wintery and the wind manageable. Our plan was to climb a direct line up the left side of the buttress, cutting across the long rightwards traverse of the 1983 Dinwoodie and Paul route The Adventures of Toad.

And what a fantastic day we had. Two pitches stood out. To get us through the first barrier Simon led a bold and tenuous ramp pitch on snow crusted rock ripples and blobs of useless short thin turf, the crux a nasty hand mantle on one of these blobs. I got the next barrier pitch an, open groove that showed off everything that’s so good about this buttress. It looked improbable to both of us.

A few moves up Simon shouted sceptically ” Can you see what you need to do?”

But each move up or across revealed something useful, a tiny flake to torque behind, another for a gloved hand, a decent edge on a snowy wall, a stein pull, a turf moustache just within reach, a promising crack that was blind and shallow, and, at a critical moment, a hidden “Thank God” hook that swallowed the whole pick.  The variety and unpredictability continued as we cut the Toad traverse on our fourth pitch. We sensed how lucky we were to be having so much fun in so much beauty, and laughed and shouted our way up to the moon lit plateau. The walk off in bright moonlight was stunning.

We called the route Haigha after the March Hare in Alice Through The Looking Glass. It was 340m and about VI,7. This long weekend, climbing Mistral with Jim and Haigha with Simon, I have fallen head over heels back in love with Scottish winter climbing.”

2 Responses to More Adventures in Wonderland