Busy in the Southern Highlands 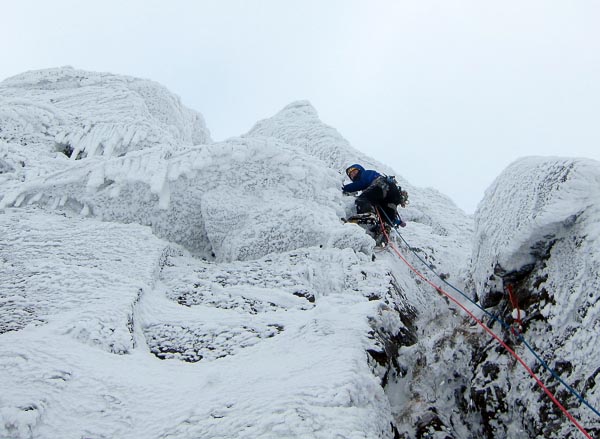 Graham Boistelle moving up towards the crux groove during the first ascent of Naebody’s Fault (IV,5) on Beinn Ime. The only other route on this area of the crag is Chockstone Chimney (IV,5), that was first climbed by Stuart McFarlane and Gary Houston in 1999. (Photo Davie Crawford)

It was busy on Thursday January 24 in the Southern Highlands.

Davie Crawford, Jamie Bankhead and Graham Boistelle went up Beinn Ime and headed up to the buttress North of Fan Gully Buttress where they climbed Naebody’s Fault (IV,5), a three-pitch mixed route that starts below a distinctive square-cut flake near the right end of a snow terrace, left of  Chockstone Chimney.

“The ice bulge on pitch 2 would be easier (tech 4) with a bit more ice,” Davie told me. “It is a good wee route and the conditions were very good. An inch of hoar covering all exposed rock! The middle pitch was a great lead by Graham as the ice was too thin to take gear – on his first ever new route!”

Further north on Creag an Socach in the Bridge of Orchy hills, Stuart McFarlane and Gary Gray made an early repeat of The Prophet (VI,7) – possibly a third ascent. Creag an Socach was busy with teams on The Sting, Messiah and Second Coming.