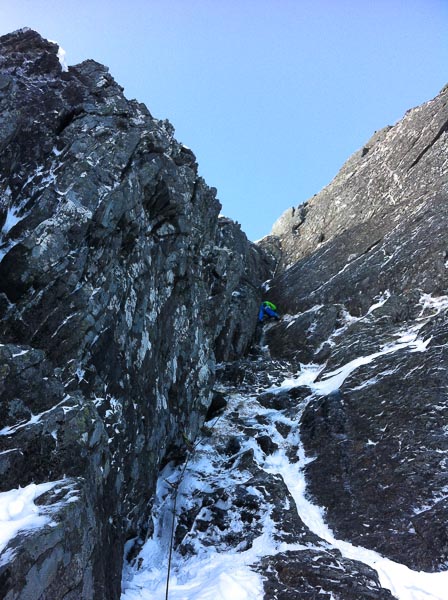 James Thacker on the first ascent of Deception (IV,6) on Beinn na Socaich in the Grey Corries. This rarely visited crag is visible on the right as you approach Coire an Laoigh and was first developed by Dave McGimpsey and Brian Davison during one hectic day in March 2002 when they added six new routes. (Photo Rich Parker)

“James Thacker and I headed in for a visit to Coire an Laoigh on January 23,” Rich Parker writes. “But as we approached we decided to divert to Beinn na Socaich which looked a little more appealing given the snow conditions underfoot at the time. We climbed what we had thought may be a simple snowy gully line curving rightwards between Hidden Gully and Vincenzo. In fact the climbing steepens and culminates in an awkward flaring groove that involves shoulders and hope. It’s fun, but quite bold and in fact required a turf thread and then two rock pegs equalised in turf to make it feel justifiable. Overall we thought IV,6 and called it Deception.”