Striking it Lucky on Beinn Eighe 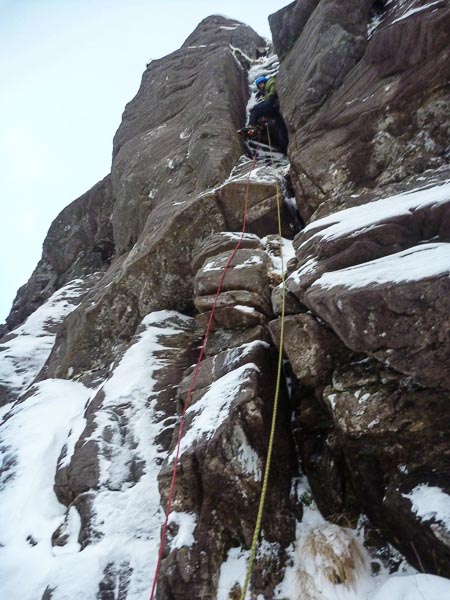 Michael Barnard climbing the first pitch of Lightning Jack (VI,6) on Sail Mhor on Beinn Eighe during the first ascent. Michael and James Duthie added two routes to the cliff and the  route names are both references to James’ brief but memorable encounter with an electrical storm in the Dolomites last summer. (Photo James Duthie)

“On Saturday (January 19) we had no fixed objective in mind, though I was vaguely thinking about one of the easier routes on Far East Wall. However, while walking along the east side of the loch and looking across to it, I was impressed by the Sail Mhor buttresses, and saw there might be a few unclimbed lines. After walking back round the head of the loch we went up to below a chimney on the left side of the wall to the left of Achilles.

I’d convinced James to let me lead the first pitch, so I just set off up the easier lower section while he was still gearing up. Of course I’d completely misjudged the length of the route and the ropes were starting to run out as I reached the start of the interesting ground, so he took the honours on that one. Lucky Strike (85m, IV,4) gave an exercise in sustained back and footing, made more fun by the fact that I had one numb hand all the way up (one of my mitts had blown away earlier).

A quick step left took us to the foot of the obvious fault-line left of Smears for Fears, which still looked fairly imposing (from a distance the top bit has an Italian Climb cul-de-sac type appearance). Unbeknownst to us this was Cave Gully, a V,5 climbed by Pete Davies and Tim Marsh in Jan 2009. It was a worthwhile climb with an entertaining section to pass a chockstone and allowed a side-step just when things started to look a bit too full-on!

The next day (January 20) we headed back up for a look at the longer line of weakness between Lucky Strike and Achilles. The first pitch featured a vertical square-cut chimney, giving some more back and footing practice with great hooks for the axes, but the next tier was clearly going to be more demanding. A steep icy corner led up to a cracked roof but I wanted to find a way rightwards into another groove, which seemed to offer the best hope for success. When I had got about halfway up the corner I looked up to see a cluster of gear hanging from under the roof – the sign of a previous retreat. This made me more determined to leave the corner. After a few attempts I managed to snag a wee bit of turf out right and Lightning Jack (140m, VI,6) was in the bag!”