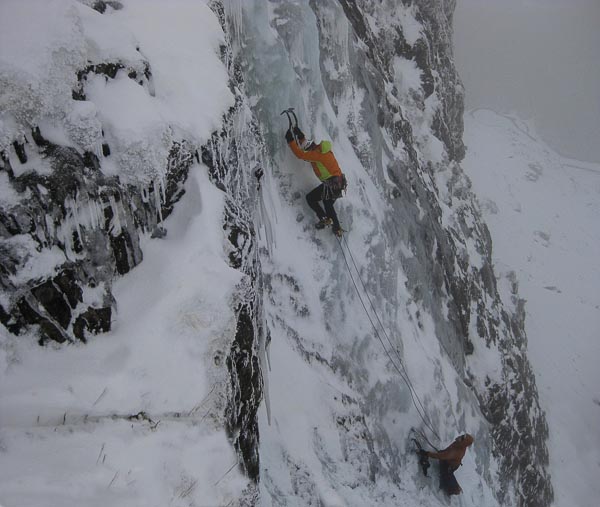 Stephen Reid and Colin Wells on the first ascent of Upper Gusher (IV), in the South East Corrie of Milldown in the Galloway Hills. (Photo: Jonathan Grubb/John Biggar)

“Three teams were active on the Merrick on Sunday,” Stephen Reid writes. “With excellent conditions reported on the Black Gairy, Colin Wells and I hastened north to join the fun. We visited Craig an Eilte on Tuesday (January 22) and made the first ascent of the two-pitch Spindrift Gully (IV). On Wednesday (January 23), together with local guru John Biggar, Dave McNicol and Jonathan Grubb, we ventured into the South East Corrie of Milldown and, whilst the Biggar team climbed two new grade III icefalls, Colin and I made the first ascent of the superb Grade IV Upper Gusher (this lies above Middle Piddle and Lower Flower – both II). On the Thursday (January 24), Colin and I returned to the corrie and made the first ascent of the Greater Cleugh of Auchniebut (II), which must be the longest winter climb in the Galloway Hills, at about 700m. Mainly scrambling with the odd tricky little pitch and very spectacular and scenic!”