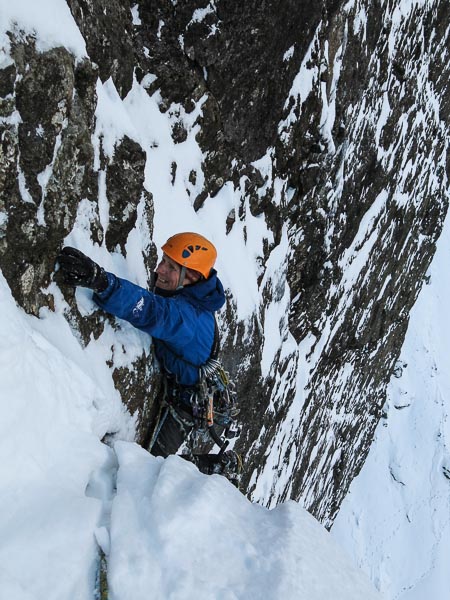 Iain Small pulling out of the constricting chimney at the top of the third pitch of Jib (VIII,8) on Blaven during the first winter ascent. This summer E1 was first climbed by Messers Boysen, Alcock, Clough and MacInnes in May 1969. The imposing wall of Stairway to Heaven (E5) is in the background. (Photo Simon Richardson)

Sometimes you have to throw caution to the wind, and chase your dream. When Iain Small and I climbed on Blaven three years ago we were struck by the soaring corner-line of Jib on the north side of The Great Prow, and vowed to return. Severely undercut at its start, it seemed an unlikely winter prospect, but Iain reminded me of it when we decided to escape the south-easterlies and head to Skye for the weekend. I reckoned that we had a 50% chance of the route being in condition, and then a 50% chance of actually being able to climb it, so it felt as though the odds were well and truly stacked against us.

Walking up in the dark on Saturday January 19 we were surprised that the scree slope below the face was covered in good neve, rather than loose powder, and we made rapid progress to the base of the route. In the pre-dawn gloom The Great Prow looked black, steep and forbidding, but as it became light we could see that, incredibly, the Jib corner was filled with snow. Our route was on!

Rather than take the original summer start, which traverses in from the right, we started up the overhanging crack of Stairway to Heaven. This led to the infamous Jib traverse, but a helpful banking of semi-consolidated snow led into the corner. Iain then made an impressive lead up the overhanging crack and fierce offwidth above. We had brought a double set of large Camalots, but even so these were not big enough to protect the technical crux. By using a sling to retract the trigger, Iain managed to place a cam at full stretch in a tenuous placement at the back of the crack before launching up a series of desperate unprotected moves to the belay.

Above loomed a constricting overhanging chimney-slot. I fought, cursed and cried my way up this, ripping my jacket as I popped out, like cork from a bottle, below an overhanging wide crack. A steep layback move and I flopped onto snow leading up to a small shoulder and a welcome flat ledge. The summer route steps back right from here into a groove, but it was logical to continue up the right-slanting corner line above. We made the top just as it was becoming dark, but there was still time to scamper down Scuppers Gully before we needed our head torches.

To wind down next day (January 20) we visited a crag that Iain had spotted a couple of years before low on the south-east side of Beinn Sgritheall. We climbed the obvious line up its centre, a good three-pitch V,5 chockstoned gully. Our bodies were tired after the full body pump the day before, and other times we may have rushed down for a second route, but we were content to call it a day, and make a leisurely descent (in daylight for a change) to the car and the long drive home.

7 Responses to Jib on Skye