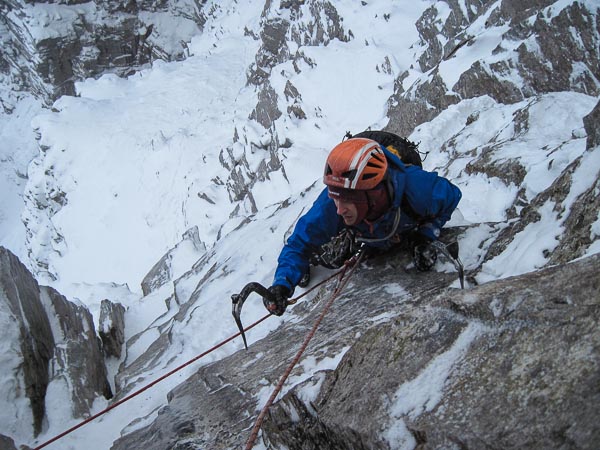 Jim Higgins on the second pitch of Mistral (VII,8) on Beinn Eighe. This summer E1 5b on West Central Wall saw its first winter ascent by the ubiquitous partnership of Davison and Nisbet way back in 1991. (Photo Malcolm Bass)

On Saturday January 19, Jim Higgins completed a long-term personal goal when he made the long-awaited second ascent of Mistral on Beinn Eighe’s West Central Wall with Malcolm Bass. Here is Jim’s story:

“Three years ago I took my first leap of faith down into the void with Graeme Briffett, our interest having been piqued by the relatively amenable grade of VII,7 proffered by the first ascensionists [of Mistral] and that, to our knowledge it had been attempted but not repeated. We ground to a halt on the crux third pitch, unable to fit reality to the guidebook description. I’ve thought about this route on and off over the proceeding seasons. After all, there are not too many routes that are of exceptionally high quality, are often in condition, but have not seen a second ascent after more than 20 years!

Our ascent epitomized the dogged persistence often needed to secure the winter prize. A 5am start into an icy gale (it seemed fitting that Malcolm and I were heading for a wall where many of the route names pay homage to wind) and a wayward ascent of Beinn Eighe’s southern slope saw us reach the summit plateau almost opposite West Central Gully, with weary legs and with more daylight behind us than planned. Inevitably our ropes then got stuck on the first abseil down the doglegged last pitch of Blood Sweat and Fozen Tears, requiring some jiggery-pokery to set them free. At last, by late morning, we were stood beneath the initial icy groove of Mistral. Following success or failure, there would be a night shift!

An efficient couple of pitches brought us to the fabulous belay ledge beneath the crux 40m third pitch on which I had failed three years previous. This time I took a more direct line slightly further right, heading for the smaller of two capping roofs with the final V-groove clearly visible beyond. This was it! The pitch was steep, often tenuous and hard won. I have to say it was the most sustained winter pitch I have ever climbed. What a belter! Pulling into the V-groove belay was a particularly joyous moment for me. I even let out a feeble squeal in celebration, which is particularly unusual for this quiet man! As darkness enveloped us Malcolm displayed steely determination in seconding, the pitch, even climbing one of the crux sections twice after dropping, then retrieving, his head-torch. We topped out at 9pm having finished up the Wall of the Winds chimney as per the first ascent (note – the V-groove of Mistral still awaits a winter ascent).

As Malcolm said, according to the new Yorkshire winter grading system the crux pitch was “reet ‘ard” but, going with convention, we will suggest “very sustained VII 8” with the route definitely worth three stars. A memorable day!”