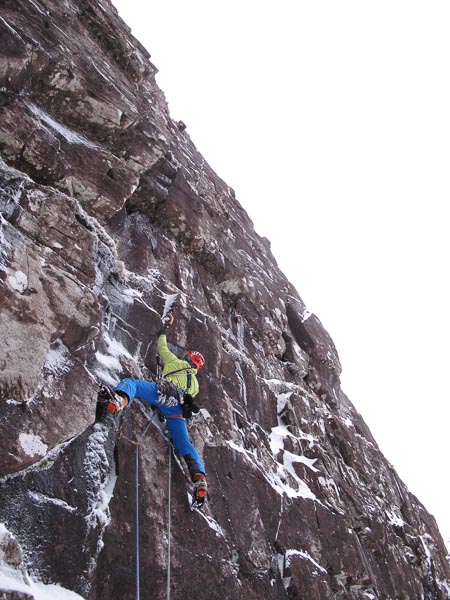 “After a four-week layoff due to cold and chest infection,” Pete Macpherson writes, “I ventured out (on January 16) with Mr Moran in the hope of a relatively easy day. Big objectives were out of the question due to my lack of fitness and chronic cough so we headed to Suspense Wall on Beinn Bhan, which has a nice short (two hour) approach and is an easily accessible crag.

The wall is extremely steep to say the least, and we struggled to find a realistic on sightable, and for that matter survivable line to try. Sometimes you just have to get in amongst it and hope that you find a weakness, such is the nature of on sighting on primitive untouched sandstone.

Four pitches of pokey and really technical climbing with a bizzare and thought provoking crux (which the Moran machine solved), got us to the easy finishing slopes. Delighted! Beinn Bhan gives pure adventure once again. Suspended Animation. We gave it VIII,9 but as Martin said at the time ‘it’s an intense passage.’ So much for an easy day!”