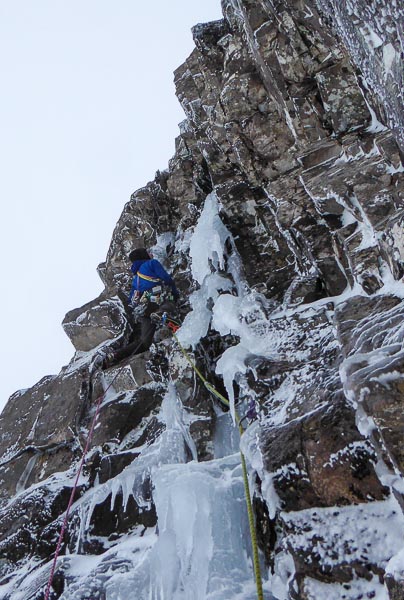 Iain Small on the first winter ascent of Private Eye (VIII,8) on Mainreachan Buttress on Fuar Tholl. The route was first climbed in 1974 by the all-star team of Boysen, Braithwaite and Nunn and graded Scottish VS. The guidebook description has the ominous warning that ‘the route looks very hard and is reported as such.’ (Photo Murdoch Jamieson)

Iain Small and Murdoch Jamieson had a memorable couple of days climbing in the Northern Highlands last week. First off was Fuar Tholl on January 22.

“We reckoned the North-West would be a better venue with a higher snow line and reports of good ice and conditions in general,” Iain told me. “I was keen to revisit Mainreachan Buttress and Murdoch was easily persuaded, with the promise of a first visit in glorious weather plus a possible new line to try. Private Eye was one of the last remaining summer lines to await a winter ascent and its ‘Scottish VS’ grade and worrying description made it an ideal proposition. After a memorable dawn walk in we geared up and descended to find the conditions were very favourable, with ice hanging and the rock white.

We made a different start to the summer slabby ramp of pitch 1 and then tried to follow pitch 2 to the cave belay but Murdoch was drawn left onto a fantastic ice drool that emerged from an icicle-festooned, overhanging fault. As he was belayed below this, I had the delicate task of not braining Murdoch. It was a pumpy, slightly worrying pitch with gear never feeling solid in the icy, shattered rock, but a stiff pull onto a ledge led to more conventional mixed corners and the girdling ledge below the last pitch.

Murdoch started with the light dimming and was soon nearing the top and making encouraging noises as to the quality. It was all reassuring hooks, gear and turf – the perfect finale. We aren’t sure how much of the original Private Eye we followed but we took the best winter line on the day. Returning to Inverness, Murdoch checked with his landlord Donnie, who of course had done a summer ascent, and could recall a cave!”