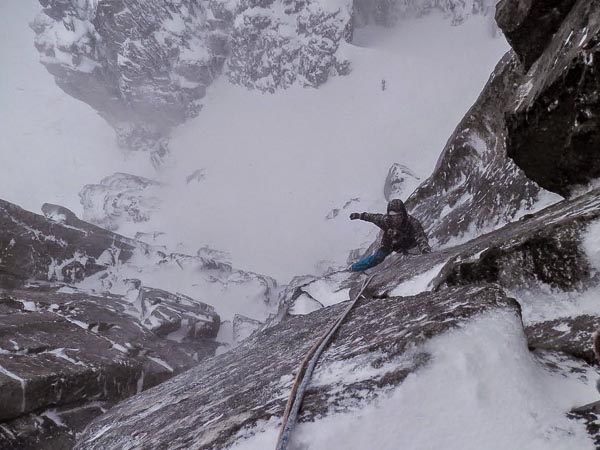 Tom Livingstone and Dave Almond had a very successful four days climbing in Glen Coe and on the Ben earlier in January. The weather was particularly wild that week, but even so, they succeeded on Un Poco Loco (VII,7 – January 13), Strident Edge (VI,7 – January 14) and Centurion (VIII,8 – January 16). Tom has written a full version of their trip on his blog, and a concise version follows below:

Dave looked up, scoping out the climbing above. He tilted his head and, without warning, his orange helmet rolled backwards, falling straight off. It bounced onto the steep slab and then tumbled out of sight. We were both speechless – how had that just happened? His head torch was still attached and we were on the fifth pitch of Centurion, a classic VIII,8 on the Ben. It would be dark in 90 minutes and we still had over 100 metres of climbing left. ‘This just got interesting!’ I thought.

We walked up to Church Door Buttress on Tuesday, seeking refuge from a fresh storm ploughing off the Atlantic. Dave’s new toys were put to good use: his new 19 million lumen headtorch is capable of lighting up the entire mountain, and the GPS watch performed well. We left a breadcrumb trail as we zigzagged up; ‘Water,’ ‘Camp 1,’ ‘Meadow.’

Un Poco Loco is a fantastic four-pitch route taking an improbable line up the centre of the buttress. A giant, shattered arch hung overhead as I scrabbled around, trying to find my feet. Dave hunkered on the belay below, his feet going stamp, stamp, stamp, trying to ward off the cold. I found tenuous hooks and laybacked off parallel cracks. Howling winds, waves of spindrift, verglas: this certainly was fun. Pulling onto the belay ledge brought relief and the internal chatter began to quieten.

The following morning we walked into the Ben with Centurion in mind. Within 50 metres of the CIC hut my boot sank through a snowdrift and plunged into a stream, soaking my foot. The only consolation was that Carn Dearg Buttress looked black, and we wouldn’t be going anywhere near Centurion. We scratched around for an alternative objective. Coire nan Ciste was too avalanche-prone, the lower buttresses were black, a storm was due to slam into Scotland at 6pm that evening and it was already 10.30am… how many lemons does it take for an epic?

We settled for Strident Edge on the Trident Buttress with Dave Keogh coming along for the ride (an Irishman staying at the CIC). We avoided triggering any slides on the wade up and I started climbing the main pitch around 1pm. The climbing flowed by, and I pulled into the belay groove some time later.

We topped out in darkness with worsening weather. By the time we were down-climbing back into the Ciste the winds were horrific – blowing us about like puppets, making us hunch over ice axes. The straightforward descent turned into a bit of a Weston-Super-Mare. Irish Dave dropped his head torch but we found it 100 metres lower – lucky man. After a long walk back to the hut (why isn’t there an outside light that comes on at night?) we finally re-packed and headed down to Fort William. I don’t think Irish Dave knew what he was letting himself in for, but hats off for rolling with it and staying strong when the storm hit!

Friday morning and we were stood beneath Centurion again, this time lucky enough to have it in decent winter conditions. Dave climbed the first pitch by headtorch, dispatching the tricky and technical moves in style. He was obviously on some weight-loss mission as a Scotch egg and Twix bar flew past my head when he got to the belay I launched into the second pitch – an impressive overhanging corner system with nearly 40 metres of climbing. As it says in the guidebook, the holds just keep coming and the gear keeps on giving. It felt amazing to be stemming wide with loads of air beneath my feet, the belay in sight and the beat of Centurion pulsing through my arms.

I belayed Dave using a large hex for a belay plate, since he’d forgotten his. I had a smile on my face and we cruised, mellow, floating on the high. I barely needed to swing my arms to keep warm, and we flowed through the route until pitch five When Dave’s helmet fell off his head, I definitely skipped a beat. It’s certainly one of the least expected things to happen to your partner as they climb. He had loosened the straps to make it more comfortable, but perhaps a bit too much.

Thankfully, Dave’s head is pretty hard and he led the pitch fine, sans helmet and headtorch. When I reached his belay, at the junction with Route II, I figured it would be dark in an hour, we still had 100m of climbing to go and we didn’t know how hard it was. However, Dave wanted to continue, so I obliged and we sprinted for the top.

We pulled it off just in time, topping out in near-darkness and descending Ledge Route in a giddy, schoolboy ‘just-got-away-with-it’ haze.

Thanks for a great week Dave, and for choosing ‘up.’