A Fiddling We Go… 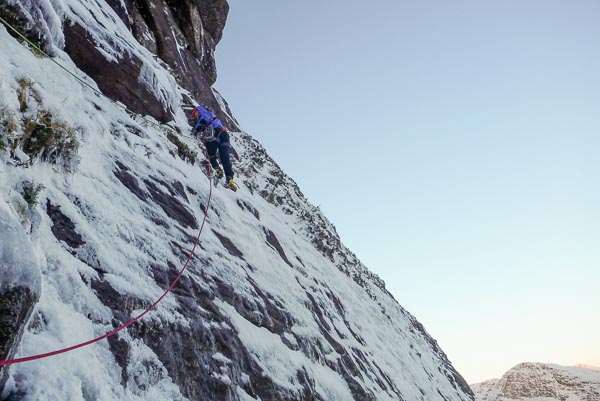 Simon Yearsley making the third ascent of Castro on the South-East Face of Sgurr and Fhidhleir. Two days later, Simon’s partner Helen Rennard returned to the Fhidhleir to make an ascent of the Nose Direct. Helen joins a small group of climbers who have climbed more than one route on this prestigious winter cliff. (Photo Helen Rennard)

Helen Rennard scored a notable double on the Fhidhleir last week with ascents of Castro and the Fhidhleir’s Nose. Helen takes up the story:

“Simon Yearsley and I were free to go climbing on January 19, and with the very cold temperatures and snowy weather, we both thought the same thing – The Fhidhleir’s Nose! We drove up through the day on the Sunday so we’d get a view of the Fhidhleir and also to check out the walk-in, which can be notoriously difficult under powder. Everything was looking good – The Nose was white and there was enough snow to outline the path, but not enough to make the going tough. In the warmth of the Elphin Hut we discussed plans and Simon suggested we try Castro instead. I agreed, with both of us thinking this would be a first winter ascent (having not read page 149 of The Great Mountain Crags of Scotland, or having checked the SMC journals carefully enough!)

In the morning we set off under a starry sky and arrived at the base of the route at first light. We were both apprehensive about the climb ahead but the clear skies, sunshine and stunning views helped to calm us. My belay at the top of pitch one was in the sunshine, a rare event when climbing Scottish mixed!

Simon later summed up the route – ‘Six pitches, overall VII,6. Highlights: the icy corner on Pitch 3; keeping a cool head with 25m of unprotected Tech 6 climbing above a big ledge; and Helen’s awesome route-finding on pitch 6 after I’d spent one and a half hours not finding the way through the final steep rock barrier [thanks, Simon!]’ We thought the route was quite serious, with all but the last pitch rather lacking in gear. Topping out under the stars we made our way down and back to the bags. Thinking we’d done the first winter ascent I texted Simon Richardson, only for him to reply that he and Iain Small had climbed the route in 2009! Ours was the third ascent. [The second ascent was made by Colin Lesenger and John Davidson in February 2010]. Still, it was fantastic to have climbed a route on that face, especially in such stunning weather.

After a day of eating, sleeping and eating cake in Ullapool, I headed back into the Fhidhleir with Neil Silver and Simon Davidson on Wednesday (January 21) to climb The Nose Direct, which was high up on all of our wish lists. We had a long and memorable day out, with difficult route finding (none of us having climbed the route in summer). Neil did a brilliant job leading the crux in the dark, and we finally topped out with a blanket of stars above and the Northern Lights in the distance. It felt comforting to follow our old footsteps all the way back to the car with each of us lost in thought.

A very long day meant that I only had time for a couple of hours sleep in the back of my car (with all of my clothes and boots still on!) before driving home and heading straight to the office. Needless to say I wasn’t on my best form at work!”