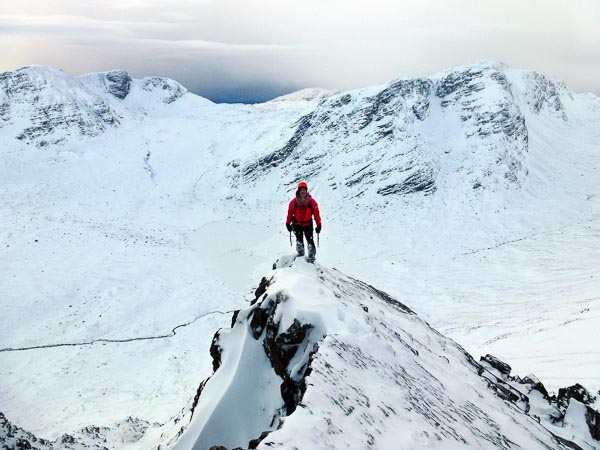 “Some of the best ever icy mixed lines have been climbed in the last few days,” Andy Nisbet writes. “But despite slight embarrassment about reporting much more modest ones, even they have a story.

After a very tiring and fruitless wade through deep snow to Beinn Bhan, Sandy Allan and I looked for somewhere near the road and potentially blown clearer than Beinn Bhan. I climbed a ridge on the south face of Beinn Liath Mhor at a grassy Severe some 10 years ago (or was it 15?), and had been waiting ever since for it to freeze; finally there seemed to be a chance and the walk-in wasn’t too far in deep snow.

A few days ago (January 21), we reached the base of Coire Lair and immediately lost the path under snow. A set of footsteps went up towards Beinn Liath Mhor by the walkers’ route, so we followed them before traversing under the cliff. Unfortunately my ridge was at the far end, and the going was very rough, so Sandy kept spotting nearer lines while my ridge stayed stubbornly out of sight. Eventually a fine looking gully wore down my resolve despite my worry that white streaks on the rocky steps might just be powder. Sandy told me not to be so negative and they turned out to be good ice, so we soloed the whole route, carrying both ropes and a rack of gear (Half Pipe Gully, 200m, II).

I was still keen on my ridge and there was a diagonal descent back to the cliff base. I had to work on Sandy to go back down to the land of deep powder and I had to keep quiet that I couldn’t really remember where my ridge was. I had some memory that it was the ridge left of Artemis, the only recorded winter route on the cliff and climbed by Sonya Drummond and Diana Preston in 2009. I remember Sonya phoning me up from the top of the mountain at 10pm in even deeper snow and asking ‘How do we get off? It’s all cliffs and avalanche prone slopes.’ I was in my warm living room at the time.

When Sandy and I finally made it round there, I think I recognised the ridge and aching legs declined the direct start for an easier groove round on the right. We soloed up to an ice step to put on the rope but it looked easy, so we soloed on, and on, and to the top over a lovely but optional arete (Zeus, 250m III). I don’t know where the Severe bit was, maybe the start or an easy slab with a strip of turf which could have been scary in summer.

Back home in Strathspey almost in daylight and reading on t’Internet about all the amazing conditions, for tomorrow my legs couldn’t face anything other than a return up the nice footsteps of the day before. Jonathan Preston was keen to join us, and he was tired from several days working on the hill. But it was the last good day of the current spell. One of the lines Sandy had spotted the day before looked good in my summer pictures so we headed there with much more ease than the day before, rather helped by the gear split three ways. For some reason Sandy wasn’t so keen on the line this time, and I was, so Jonathan could laugh at the old guys bickering. The start was a narrow chimney which I refused to lead with a sack and Sandy refused to haul it, so we bickered some more and Sandy led it with his sack. The next pitch was a chimney too, which I led with my sack and Jonathan led a third pitch with some ice (Grey Vote, 180m, IV,5).

It seemed a bit early for going home despite deteriorating weather, but funnily enough Sandy disagreed. I offered to go and solo another ridge but despite being accused of route bagging, the others soloed it too (McTwist, 200m, II). The weather was worse on top but I had refused to take a map or compass on such a simple hill. I soon had some sympathy for Sonya as I took a poor line but fortunately recognised the wrong valley below and sidestepped the embarrassment. Two great days with just a hint of FOMO (I had to Google that one) over all the big icy mixed lines.”