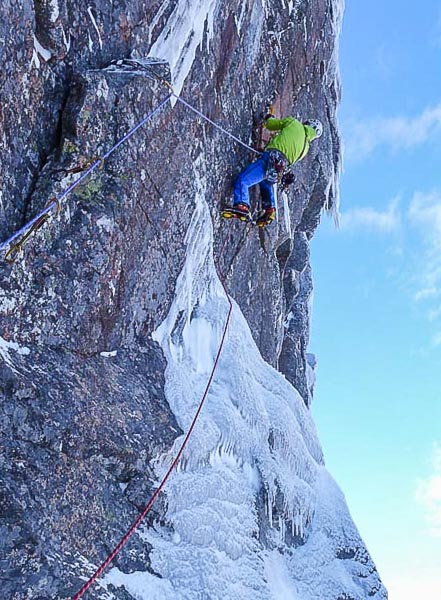 Greg Boswell on the crux pitch of Range War (X,10) on Creag and Dubh Loch. This was the second on-sight Grade X led by Greg in the space of four days and is a significant event in the history of Scottish winter climbing. (Photo Guy Robertson)

The 100m-high Broad Terrace Wall on Creag an Dubh Loch is one of the most awe-inspiring cliffs in Scotland. It is situated above a steep lower wall and all the routes are sensationally exposed. It overhangs for much of its height, but the angle tips back considerably the wrong side of vertical between the lines of Sword of Damocles and Culloden. In summer this section is breached by two mythical climbs – Flodden (E6) and Range War (E4). Both routes are rarely climbed, but Flodden is slightly cleaner and sees occasional ascents when the cliff is dry. Range War is the steepest line, but unfortunately the first pitch is very vegetated and the route has only been visited a handful of times since its first ascent by Kenny Spence and Duncan McCallum in July 1983. It had been noted however as a possible futuristic winter line.

Over the last three seasons Greg Bowell made a winter ascent of Range War one of his prime objectives. He made the long approach into Dubh Loch seven times to recce or attempt the route, but it was only in condition on one of these occasions, and then it was thawing fast. Finally on January 22 the stars aligned, and Greg and Guy Robertson made a tough approach through deep crusty snow to find the cliff hoared up and dripping with icicles and frozen turf.

The pair decided to climb an alternative start to the left of original summer line, so Guy led a long and sustained pitch up steep turf and a series of overhanging capped corners to the Grass Balcony, a welcome ledge in a sea of overhanging rock. (This pitch was climbed last season by Doug and Uisdean Hawthorn). Greg then prepared himself for the daunting 35m-long overhanging crux pitch that is graded 6a in summer. After his outstanding lead of The Greatest Show on Earth just three days before, Greg was initially unsure whether he had the physical and mental strength to make the lead.

“I started up with every move nudging my thoughts into the correct headspace, and found myself enjoying every second of the experience’” Greg wrote on his blog. “I composed myself and tried not to let the technical torques and moves get one arm more pumped than the other. I continued up and then the pump started to sneak in. I was shaking and looking for the next move, shaking and looking, this process went on until I decided to charge for the niche that looked like it would be home to a nice comfortable rest. Unfortunately this wasn’t to be. The route’s steepness was deceptive and although the niche wasn’t as steep as the lower wall, it was still very overhanging. I fought to get some gear in and try and de-pump my now burning forearms. Deep Egyptians and contortions were tried to relieve my arms, and finally, once I had scoped what looked like the way to sanctuary, I powered on through the steep capping roof of the niche to gain a wild and astonishingly exposed position on the overhanging arête. Hundreds of meters of cliff dropping away below me with nothing but air between me and the corrie floor. This is a memory that will last a lifetime!”

Greg had climbed the crux, but the pitch was still far from over.

“After that it was out onto and over the ice-capped overlap and into a position below another steep ice smothered bulge. At this point the head games had returned, I really didn’t want to blow it at this point, but the next section of climbing was not too hard but very off balance. With only a turf hook half hammered into the capping ice, as there wasn’t enough for screws (which we did remember this time), I had thoughts of fluffing it and taking the ride into the exposure in the back of my head as I committed. Eventually I gained easier ground and the comfort of the ice cave where I belayed and took in the exposure in a more comfortable state.”

Guy followed and led the top pitch on thick bulging alpine style ice to the top.

Greg contacted me the following day. “Scotland has gone and worked its magic again,” he said. “Another outstanding route went down yesterday. Three years I’ve been wanting this one, and it was worth waiting for and all the unsuccessful walk-ins. Breath-taking and possibly up there as one of the best pitches I’ve ever done!”

Greg and Guy gave Range War (Winter Variation) the same grade as The Greatest Show on Earth at X,10. Two new Grade Xs in the space of four days significantly raises the bar, and in response, the small but tight-knit world of Scottish winter climbing world has collectively gasped in astonishment.