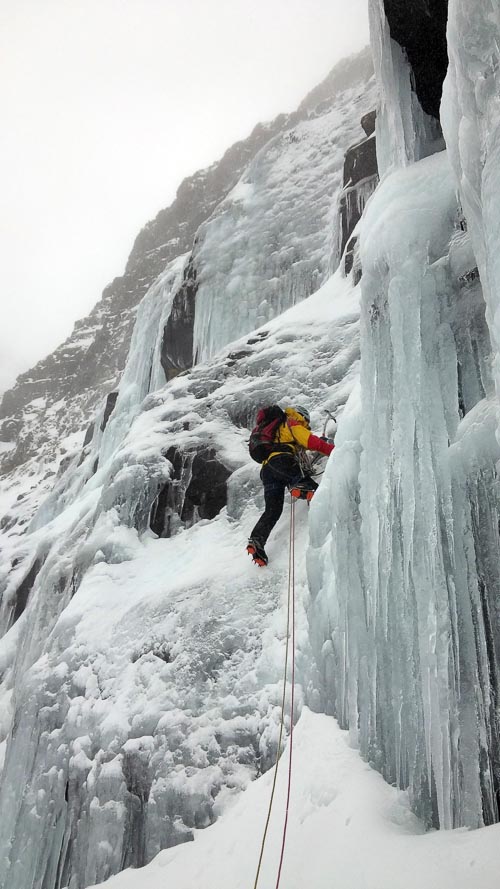 Andy Nisbet on the first pitch of the Direct Start (V,5) to the Wall of the Early Morning Light on Beinn Bhan during the first ascent. The complete outing provides nearly 400m of sustained ice climbing on one of Scotland’s finest winter cliffs. (Photo Dave McGimpsey)

Andy Nisbet, Dave McGimpsey and Steve Perry made an excellent three-pitch addition to Coire na Poite on Beinn Bhan in Applecross on March 5. Andy takes up the story:

“When Dave McGimpsey, Jonathan Preston and I were climbing a new mixed line left of Silver Tear in 2013, Dave pointed out an obvious right-slanting line up the back of Coire na Poite and asked what it was. When I said it was nothing, he was most surprised. It looked a logical natural line in a popular corrie. I later realised it joined Wall of the Early Morning Light and was therefore an unclimbed direct start. We agreed to climb it together.

It may not have been in nick in 2014 or 2015; at least the weather wasn’t cold enough to inspire me to go there. Plus Dave was mostly working away and not climbing, so the route had to wait. So it was most convenient when Dave’s contract ended just as conditions looked promising. Skye had been in great icy nick the previous weekend and Applecross was near Skye, certainly far away from the unconsolidated conditions in the higher mountains. The only worry was that no-one had logged Silver Tear on ukclimbing, and only a couple of March Hares had been logged, but all my instincts said that conditions would be good apart from perhaps the walk-in on crusty snow over heather. We agreed to climb on Saturday (February 5), and fortunately Steve Perry’s new job had been delayed, so we had three for trail breaking.

In the end, the walking was as good as it ever is for that corrie, with little snow until the final slope into the corrie bowl was reached, and then you could often walk on top with only the occasional crusty collapse. And when we reached the corrie, we couldn’t believe how icy good the conditions were. Even the top vertical icefall of Silver Tear was fat, and our line was ice top to bottom. I guess so many places were in nick that Beinn Bhan had just gone unnoticed.

The second pitch, where we would join the main groove line, had an obviously steep entry, but we talked about how the first pitch might be soloable, thereby saving us some time. What a joke when we got close; it was clearly steep and sustained and I volunteered to lead it. I ran out of 60m rope conveniently at a rock wall, but still well below the groove; our assessment of scale was well out too.

Steve took over for pitch 2. By now it had started snowing and the wind had got up, despite all the forecasts saying it would be dry, so it became increasingly irritating as waves of spindrift were flowing down the cliff, although with no great volume. Steve in the lead actually didn’t notice, concentrating on climbing carefully and placing all our ice screws on this steep pitch; only he was strong enough to double up in the middle of the steepest section. The belayers were worried in case he needed ice screws for a belay, but again he just reached rock.

Dave’s turn; a near vertical corner was hidden ahead. Dave romped up it, despite being the steepest ice he’d climbed for three years, and we reached the line of Wall of the Early Morning Light. I was wondering why they took such a wandering line in 1971 and now I knew. Steep ice at V,5 wasn’t in favour until front pointing was established. But the rest wasn’t exactly low angled, just a bit less on the arms, as I found leading a long groove pitch.

A couple more pitches, each slightly easier than the previous, led us to the summit snow slope. It turned out to be wind blown hard snow, and there was a convenient break in the cornice. It’s always hard to judge scale but the anticipated 70m turned into 40m, and we were up in daylight in much better weather. The plateau was solid ice so the going was easy, but we still needed torches for the final descent to the car. Maybe not surprising after 370m of steep ice and snow on one of Scotland’s biggest and best cliffs in such good conditions.

We felt we could only give it three stars when the even more sustained Silver Tear sat nearby and gets its four. But it’s still a very fine route, and another, which could make my winter. More to come I hope.”