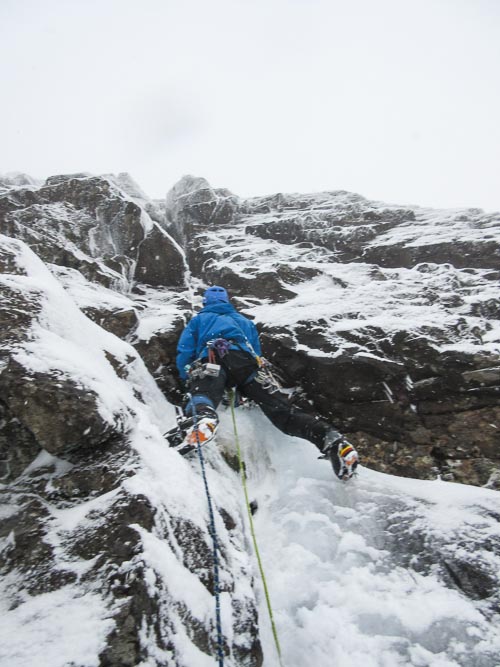 Michael Barnard on the first winter ascent of Sherriff’s Ransom (V,6). This is one of nine new winter routes added to The Cuillin during the very successful Skye Winter Festival that took place in January. (Photo Mike Lates)

The Skye Winter Festival is the brainchild of local guide Mike Lates and has become a regular fixture on the winter climbing calendar. The meet is based at the Carbost Inn and has done a huge amount to bring the winter climbing potential of The Cuillin to the forefront of attention in recent seasons.

This year, the Festival ran from 14 to 27 January and started on a real high when James and Doug Sutton made the first winter ascent of Crack of Dawn (VIII,8) on the first day of the meet. This 180m-long route is situated on the North Face of Sgurr MhicCoinnich and is graded HVS in summer and was in outstanding mixed condition. “Grade VIII is as hard and serious as any route on the island and well and truly keeps The Cuillin on the hard man’s radar,” Mike commented later.

On January 15, Mike Francis and Dave Bowdler made the first winter ascent of the North Rib (IV,5) of Banachdaich Gully, whilst Lates teamed up with Pat Ingram to climb Park Lane (V,4), on a previously unclimbed crag low down to avoid the unconsolidated conditions higher up.

The following day (January 16), the Francis-Bowdler team visited Coire a’Ghrunnda and added a Direct Start (IV,4) to South Buttress, whilst Mike Lates and party made the first winter ascent of Owl Chimney (IV,5). Further up the corrie, Michael Barnard and Pat Ingram found Tres Difficile (V,6), a steep mixed route left of the TD Gap summer route before attempting a new route to the right of his 2015 addition Skye High on the South Face of Sgurr Alasdair.

January 18 saw two new routes added to the Stone Shoot Face of Sgurr Thearlaich courtesy of Barnard and Lates. The Bogeyman (VI,7) was a serious and sustained route with limited protection and poor rock, whilst further left, Mr Charlie (VI,7) was extremely steep, but was considerably more solid.

The final new route of the meet took place on January 19 when the unstoppable Michael Barnard returned to the South Face of Sgurr Alasdair with Lates to complete the excellent Sherriff’s Ransom (V,6). After this the weather gradually warmed and the outstanding mixed climbing conditions disappeared, but once again, the Skye Winter Festival had contributed an excellent run of new winter routes to The Cuillin.

A full report of the Festival can be found on the Skye Guides website.