Posted on February 28, 2015 by Simon Richardson 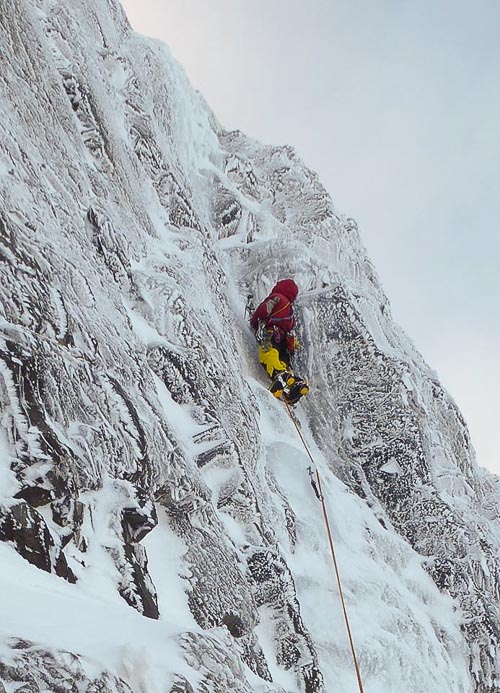 Mike Lates on the first ascent of the excellent-looking Onceicle (V,5) in Coire a’Bhasteir on Skye. This was one of 20 new routes climbed during the two-week long Skye Winter Climbing Festival in late January to early February. (Ally MacAskill)

Several folks have commented that I left a bit of a teaser about the Skye Winter Climbing Festival following my post about Here Today, Gone Tomorrow. The festival was an outstanding success with over 20 new routes and only one day of climbing lost to the weather. Mike Lates, Skye guide supremo, and organiser of the Festival, has kindly provided the following report.

“The fifth Skye Winter Climbing Festival expanded this year to two weeks instead of a long weekend,” Mike writes. “It was a bit of a gamble, but it paid off big style with participants and the weather all playing their part. We were forced to move away from the Glen Brittle Memorial hut because of their renovations and moving next door to a pub sounded dangerous!

The aim has always been to demonstrate that Skye should not be written off for winter climbing. Historically it has suffered because of a general obsession with the much-hyped Winter Traverse and a very slow realisation that the Cuillin offers superb mixed climbing. Ironically, the fickle weather that makes a huge undertaking like the Traverse unlikely, is precisely what technical Cuillin climbing needs, and boy did this year prove it!

Ironically this year has seen more ice than I’ve ever known – I’d even placed more Cuillin screws before Christmas than any previous season’s total. More ice formed hugely early January but I was gutted to see it diminish a couple of days beforehand. Tim Oates and Michael Barnard were just sharp enough to snatch the big ice pitch of Here Today, Gone Tomorrow (IV,4) on Day 1 of the festival (January 24) but the following day saw all but the highest ice destroyed in a tropical storm.

The skies cleared overnight and the next day (January 26) saw Rory and Malcom Morris, Craig Rennie and Dylan Coutts add two new lines on Thuilm; the first called Generous Gully (I) because I’d pointed it out to them as an obvious target.

We went into Coir’ a’Bhasteir on Wednesday (January 28) to discover huge fat ice on the back wall behind the lochan that had definitely not been there on Monday. Our conclusion was that a slurry of slush had just sunk down the wall and stuck solid. Many of the new arrivals over the next few days had little or no ice experience and these walls provided a selection of superb 50m lines for folk to try their hand.

Friday (January 30) started OK but degenerated into a mega-storm that I was glad to see everyone return from. Four of us climbed the right-hand of two prominent lines that had often form thinly but always remained elusive. Word-meister (Mak Francis) Beads concluded it should be called Twicicle (IV,5).

At the opposite end of the Ridge James Sutton was doing battle on Con’s Cleft (E1) with his brother Doug using tools for the first time and Ben Weir presumably shouting advice from below the overhang! They were stopped 25m from the top and it was my pleasure (Type 2 at times) to head back with James on the Sunday (February 1) to complete the ascent. I’ve limited experience, but thought VII,7 was James being pretty conservative.

Michael Barnard was back on the Saturday (January 31), this time with Josh, and, again, he mopped up. South Gully on South Crag is pretty low lying and had been on my ambition list. The guys did another shorter route too. Next day he was beside us on the Alasdair cliffs on a really good looking icy groove-line which they named Skye High and gave it V,7. Monday (February 2) was the first day with little wind and Ally MacAskill and I headed back into Coir’ a’Bhasteir and thoroughly enjoyed steep ice on Onceicle (V,5).

Tuesday (February 3) saw a split across the island with a huge dump stopping abruptly south of Sligachan. Fiona Murry and Alison Coull committed to the swim into the Bhasteir icefalls on their second attempt but were rewarded with Making Memories (V,6) on Garbh-bheinn the next day. I’d been into this virgin cliff twice before but never had any joy. It’s an unusually vegetated gabbro cliff but Wednesday February 4 saw it dripping with ice and frozen turf and none of Tuesday’s snow! Mo Barclay, Stuart Leonard and I grabbed the first good-looking line leading to a tight crux chimney with a crucial chockstone. Full of character we thought Chockolates was worthy of two stars at V,6. Stuart from Hong Kong and came up with the perfect name for another route we snatched before dark – Yat for the Doh translates as One for the Road. James also snatched the third ascent of The Smear (V) that day as consolation for backing off Deep Gash Gully, again with his very game brother.

The following day everything seemed to be running and dripping in Coir’ a’Mhadaidh but Murdo and Beads found Farcicle (V,5) still user friendly in the fridge that is Coir’ a’Bhasteir. This point was further exaggerated the following day when Francis and John found the North West Face Route (III) on Gillean in stunning nick as they climbed up above the clouds while everyone else headed south.

This incomplete summary focuses largely on new route highlights but there was much more activity with teams on established routes, wandering the corries, getting excited on the ridges and peaks. My favourite memory was stood on the balcony of the bunkhouse, listening to the ice cracking as we watched the full moon light up the Cuillin at the far end of the loch. And finally, huge thanks to the staff and locals at the Old Inn for making us all so welcome. We’ll be back!”