Posted on February 25, 2015 by Simon Richardson 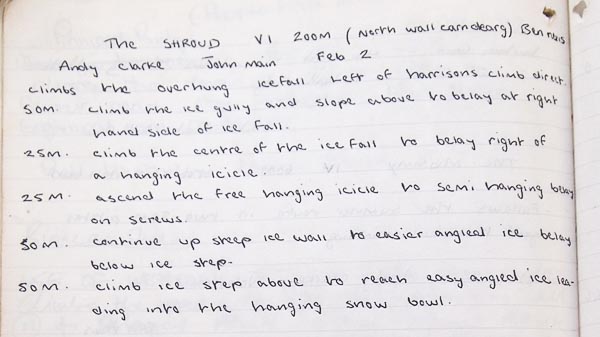 The entry for The Shroud in the Nevisport New Routes book. The great hanging icefall of The Shroud (VI,6) on the North Wall of Carn Dearg is one of the most sought after pure ice routes on Ben Nevis. It is not often in condition, but this year it has had several ascents with even left-hand and right-hand versions available. The original description reveals that the first ascent by Andy Clarke and John Main on 2 February 1993 was particularly bold, as the free-hanging ice fang did not connect with the belay ledge. (Photo Colin Moody)

In today’s Internet and Social Media world, it is interesting to reflect that only a few years ago, news about new routes was passed around by word of mouth. As is the case today, significant events were highlighted in climbing magazines, and most new route descriptions made their way into club journals such as the SMCJ, but there could be a lag of over a year before a description was published and folk were aware that a route had been climbed.

Many climbing shops in the UK hosted new routes books, which allowed a more rapid sharing of information. Colin Moody has done a fantastic job photographing  two volumes of the Fort William Nevisport New Routes book and making them available on his blog. It captures many of the important developments in the 1980s and 1990s in the Western Highlands.

“Recording of routes was often done soon after the events (sometimes the same day) so these books were considered good sources of up to date information,” Colin explains on his blog. “They have been held by many grubby hands. I was told that for University John Redhead did a study of how long after people went into Pete’s Eats they wrote up their routes!

The Nevisport books in Fort William were mostly for nearby Glen Nevis but also covered climbs from the Outer Hebrides, Skye, Creag Dubh and the rest, even a few central belt routes. Winter climbs on Ben Nevis, Creag Meagaidh and others were written up. Many routes (especially short ones) were never sent in for the SMC Journal, I’ve noticed a few routes that never made it into the guidebooks. Andy MacDonald has kept these books and let me borrow and copy them, unfortunately an earlier book has gone missing.”

Well done to Colin for taking the initiative to make this material available for all. I for one, have enjoyed browsing the pages and sensing the immediacy and first-hand nature of the reports.

Several other new routes books throughout the UK few can be viewed at rockarchivist.co.uk

Simon Richardson is a passionate Scottish winter climber
View all posts by Simon Richardson →
This entry was posted in Book Reviews and tagged Colin Moody. Bookmark the permalink.