Posted on February 24, 2015 by Simon Richardson 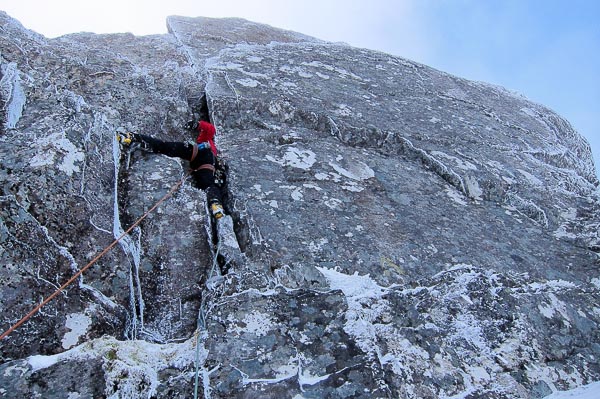 Keith Ball climbing the second pitch of The Crack (VIII,8) on Ben Nevis. The route follows an inverted staircase of overhanging steps up the centre of the front face of Raeburn’s Buttress. The crack line cutting through the second step can be seen directly above Keith’s arm. (Photo Dave Rudkin)

Dave Rudkin and Keith Ball notched up an important repeat on Ben Nevis on February 21 when they made the second ascent of The Crack (VIII,8). This HVS summer line takes the striking crack system running up the front face of Raeburn’s Buttress. Due to its steepness it is rarely in condition, and Dave and Keith chose to attempt it directly after a heavy snowfall. The Crack was the most difficult of the 30 or so new winter lines that Chris Cartwright and I added to Ben Nevis over a ten-year period from the mid-1990s. It’s great that almost 15 years to the day, it has seen another ascent!

“Keith and I have been up in Scotland working for PYB,” Dave explained. “We have managed to climb some of the classic ice routes on Carn Dearg on our days off, which has been fantastic; firstly we climbed The Shield Direct (with Matt Stygall), then Gemini, The Shroud and finally The Bewildabeast. This weekend we thought the mixed climbing would be good so headed back up that way.  From the CIC hut we carefully negotiated the slopes below Carn Dearg until below The Crack. What a brilliant route! Strenuous and sustained as you say in the guide, I even managed to drop a few hand jams into rimed up cracks – pure joy!  We climbed the difficulties in four pitches but went directly up the chimney (which required a very awkward move to get started) for the fourth pitch instead of traversing [and climbing parallel on the] right as you did on the first ascent.

I’ve added some photos, and hope they bring back some good memories.  I’m glad I didn’t have leashes on!”