Posted on February 22, 2015 by Simon Richardson 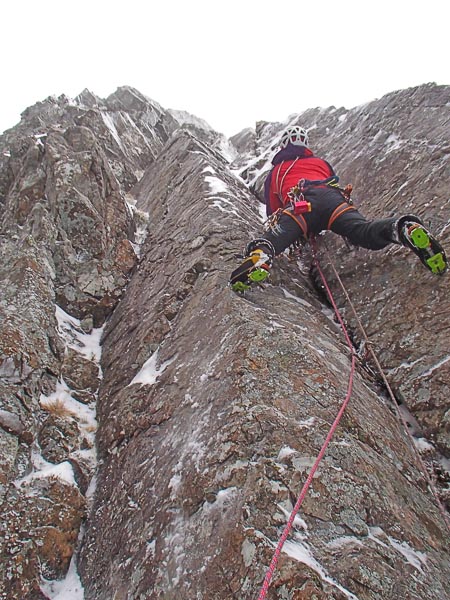 On February 17 Steve Holmes and Duncan Curry added a good mixed route to Secondary Tower Ridge on Ben Nevis. The 95m-long Inception (V,7) climbs the left edge of the inset area of crag between Douglas Gap West Gully and the start of 1934 Route. This area is best known for Fawlty Towers, a popular Grade III outing when the weather is poor. Inception starts 15m up West Gully, and lies directly opposite the start of the South-West Ridge on the Douglas Boulder, below a left-facing corner ramp. The route climbs the well-defined initial corner, a constricted chimney followed by a cracked wall to finish up another chimney and snowy grooves to reach the crest of Tower Ridge.

The day before (February 16), Pete Harrison and Tom Livingstone scored a notable repeat with the third ascent of Heidbanger (VIII,8) on Central Trident Buttress. “We both thought the route was very good,” Pete told me. “We reckon it’s worth two stars because it’s fairly short, but it has excellent quality climbing. The first pitch is steep to start then a bit strenuous up the wide crack, and is fairly well protected. The second pitch is beautiful face climbing on small edges – teetery, but with good wires where needed. The third pitch was an icefall… We both thought VIII 8 was spot on, and not soft!”