Posted on February 21, 2015 by Simon Richardson 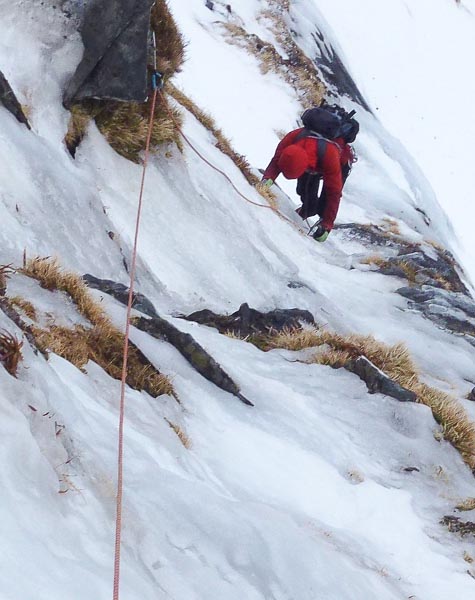 Dave McGimpsey on the first ascent of Bolero (V,5) in Coire nan Eun in the Fannaichs. This mid-height north-facing crag has been proved to be a good location for middle grade ice routes this season. (Photo Andy Nisbet)

“After such good conditions on Mullach nan Rathain but the rest of the north-west with little snow, and reports of bare rock in the Cairngorms, somewhere kind of middling was needed,” writes Andy Nisbet. “Coire nan Eun in the Fannaichs might just do the job, so Dave McGimpsey and I gave it a go on Sunday February 15. The forecast was for increasing wind so an early start (by our standards) was made. The plan was that the wind would blow our bikes up the road and get us to the crag, then we’d be sheltered on the north facing cliff and once we’d done a route, it didn’t matter what hit us for the way home.

The only snag (but one we could handle) is that it seemed a nice day and there wasn’t much wind to blow us up. Garbh Choire Mor seemed a bit bare but it gets the sun, so our crag would be fine. Which it was until we walked along the approach terrace and couldn’t see any snow or ice. Plans A and B were completely bare, so improvised plan C of climbing some easy ice at the right end of the crag would have to do. But when we got there and looked at the route descriptions, there was a tempting but very steep corner that held a strip of ice. Then we realised that the existing route Bunny Boiler climbed the second ice line from the left and the steep corner was the first. So why not give it a go? At least I’d had early morning thoughts and added an ice screw to the rack at the last minute.

There was an easy introductory pitch leading to the corner; maybe we should solo it. But we decided to put the rope on and it turned out to be much steeper than it looked. Which of course made the corner even steeper and rather intimidating. But there was a fine horizontal crack in the perfect place for a belay, so no excuses really.

I set off up the corner with the odd position of climbing pure ice but with bare rock either side. The right side was completely smooth but the left side soon gave a bridge and a good runner. Back up the ice and a spiral bulge called for the ice screw. Some strenuous moves up from this led to another bridging ledge on the left. It turned out I could actually step left and just rest on a strange perch with a nice crack for runners. Back on to the ice, now a little hollow, but a couple of moves not kicking too hard soon solved this. The finish was up a hidden gully on to the windy plateau.

One of the nicest features of this crag is the easy descent, although a southerly wind didn’t allow us the normal free wheel on the bikes back to the car. The recent routes here have dance names, but since this had been an ice dance, the name Bolero (V,5) seemed appropriate.”

Simon Richardson is a passionate Scottish winter climber
View all posts by Simon Richardson →
This entry was posted in New Routes and tagged An Coileachan, Andy Nisbet, Dave McGimpsey. Bookmark the permalink.