Posted on February 20, 2015 by Simon Richardson 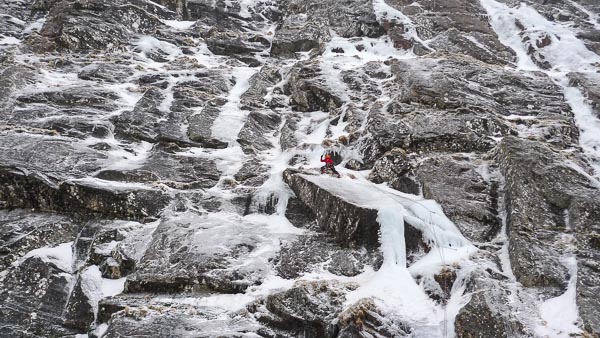 Uisdean Hawthorn linking pitches 1 and 2 during an early repeat of Extasy (VIII,8) on Creag Meagaidh’s Pinnacle Buttress. This rarely in condition route was first climbed by Dave Hesleden and Bruno Sourzac in 2005 and is one of Scotland’s most sought after ice climbs. (Photo Iain Small)

Uisdean Hawthorn teamed up with Iain Small and Murdoch Jamieson to complete a remarkable double on Creag Meagaidh last week (February 12 -13). Uisdean takes up the story:

“Having got down from doing Han Solo on the Ben, I sat in the van, checked the weather and then texted Iain Small to see if he was about on Thursday. He quickly responded saying he and Blair were headed to see if The Fly Direct (VII,6) was there, and I was welcome to join them.

When we got to the loch the next morning we could see the crag looked good with lots of white lines streaking down the cliff.

The Fly Direct was in good condition apart from a sugary section on the first pitch, which Iain skilfully picked his way past. We did it in five long pitches making for a fairly quick fun ascent. I had arranged to go out with Murdoch Jamieson on Friday and Iain decided to join, as Extasy (VIII,8) was looking incredibly icy so we stashed the gear decided to come back for that.

The next day the three of us were buzzing with excitement as we geared up below the crag. We wondered whether we could link pitches 1 and 2 together and thought our ropes would reach. So I set off, on what turned out to be an extremely interesting pitch! I picked my way up the features weaving from icy corner to steep ice onto the icy slab then up a turfy groove. I even got to place my first warthog (my joinery apprenticeship coming in handy), which was the only gear for the last 20m. And thankfully I had enough rope to reach the ledge

Iain and Murdoch both led the their pitches very well. Iain’s had a very delicate bold step to gain an ice ramp, and Murdoch’s a steep committing mixed corner. Me being indecisive and description inaccuracies meant an easy 20m pitch took longer than it should have. That left a long pitch to the top with a few hard steps, which Iain took in his stride leaving us grinning at the top still in daylight. [This was the fourth ascent of Extasy].

I would have been delighted to climb just one off these routes in a season but to climb them both in two days, after doing a new route on Ben Nevis the day before, left me on a high and loving Scottish ice, and wondering why would anyone want to climb anywhere else.”

“I’m not sure how our first two pitches on Extasy relate to the original description but we definitely climbed the original pitch four corner on our third pitch,” Iain explained. “I had arranged a day out with Blair on Thursday [February 12] and driving up Uisdean got in contact about joining us. I reckoned The Fly Direct would be a good bet and Blair was very keen for this rare classic. Also it would give me a chance to scope out conditions on the crag for Friday with Murdoch and Uisdean. The Fly lived up to its reputation and descending we got to check out Extasy. The face was teeming with ice and we could pick a line of grooves and ramps that led to the corner pitch. So we were back next day and with cooler conditions helping we had a great climb, giving the old warthogs a rare day out!”