Posted on February 4, 2014 by Simon Richardson 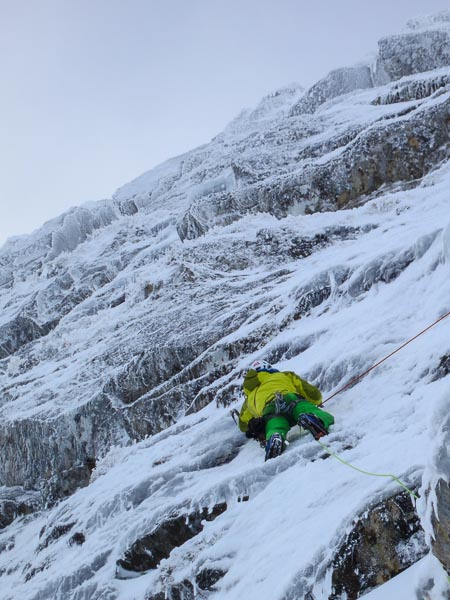 Nick Bullock climbing Extasy (VIII,8) on Creag Meagaidh. The third ascent of this legendary route on the second day of the BMC Winter Meet set the tone for the rest of the week. Despite poor weather, more new routes and high standard repeats were achieved than ever before. (Photo Jon Walsh)

The BMC Winter International Meet took place between January 27 and February 1. The meet was based at Glenmore Lodge, and 44 guests from 26 countries paired up with UK hosts to experience the delights of Scottish winter climbing. Despite the challenging weather and almost continuous gale force easterly winds, the meet was an outstanding success with over a dozen new routes and a significant number of repeats. Once again, Becky McGovern and Nick Colton from the BMC did a superb job keeping everyone teamed up with appropriate partners and staying cool and calm whilst fixing innumerable logistical issues.

The big route from the early part of the meet was the third ascent of Extasy (VIII,8) on Creag Meagaidh by Nick Bullock with Canadian climber Jon Walsh on January 28. This long, serious and poorly protected route, which was first climbed during the 2005 Winter Meet by Bruno Sourzac and Dave Hesleden, has only been repeated once. Nick and Jon encountered difficult thin and ‘cruddy’ ice conditions. “Even Jon, who has done more hard Rockies alpine routes than most, was slowed down by the first pitch,” said Nick afterwards. In general, the snow was too heavy for good climbing on Meagaidh, although one determined team succeeded on Staghorn Gully.

Ian Parnell and Michelle Kadatz from Canada took advantage of a very snowy Ben Nevis to make the fourth winter ascent of Centurion (VIII,8) on Carn Dearg Buttress. Although this route was first climbed in winter 28 years ago, it has maintained its reputation as one of the more difficult Scottish Grade VIIIs. This ascent rounded off an exceptional three days for Michelle who had already made the third ascent of Slenderhead (VIII,8) on Stob Coire nan Lochan and the fourth ascent of West Central Gully (VII,8) on Beinn Eighe.

In Coire Ciste, Greg Boswell and Mirko Breckner from Germany made the second ascent of Heidbanger (VIII,8) on Central Trident Buttress. This challenging winter climb is graded E1 in summer and was first climbed by Rich Cross and Andy Benson in 2007. Nearby on South Trident Buttress, Fiona Murray and Siw Ornhaug from Norway repeated Gallifrey Groove (IV,5).

Tower Ridge saw multiple ascents and was a wise choice in the conditions, but the low snow level also brought The Douglas Boulder into play. The classic South-West Ridge, Cutlass and Militant Chimney saw ascents, and on January 28, Neil Silver and Kenshi Imai from Japan climbed Nutless and added the Arete Variation (VI,6). The weather was wild the following day (January 29), but Rose Pearson from New Zealand and myself followed the summer line of East Ridge (IV,5). Rather surprisingly, I can find no record of a winter ascent of this short and accessible climb, which proved to be a good route for a stormy day. I returned again on January 30 with Stefan Jacobsen from Denmark to climb Alaska Highway (IV,4), the crest of the buttress taken by Lower East Wall Route before finishing up Tower Ridge.

Dave Almond and Gustav Mellgren from Sweden braved the higher slopes of Coire na Ciste to climb Sidewinder adding the Unwound Finish (VI,6) which climbs up directly rather than traversing left into the exit gully as per the original route. The rarely climbed 1944 Route also saw an ascent by Ian Bryant and Pawel Wojdyga (Poland), and lower down on Carn Dearg Buttress Kenton Cool and Corne Brouwer from the Netherlands climbed Route One. Nearby on Am Bodach in the Mamores, Andy Nisbet and Ricardo Guerra from Portugal made the first ascent of the 350m-high South Buttress (II).

Greg Boswell and Mirko Breckner and Andy Inglis and Martin Zumer (Slovenia) made early repeats of Central Buttress with the Starting Blocks Start (VII,8), and Slenderhead (VIII,8) saw second and third ascents by Will Sim and Michelle Kadatz (Canada) and Ian Parnell and Olov Isaksson (Sweden). The finest performance in the corrie came from Harry Holmes and Polish climber Piotr Sulowski who made an ascent of Unicorn (VIII,8). Not only was Harry recently back from the Ice World Cup, but Piotr’s ascent of the difficult second pitch was his first ever Scottish winter lead!