Posted on February 5, 2014 by Simon Richardson 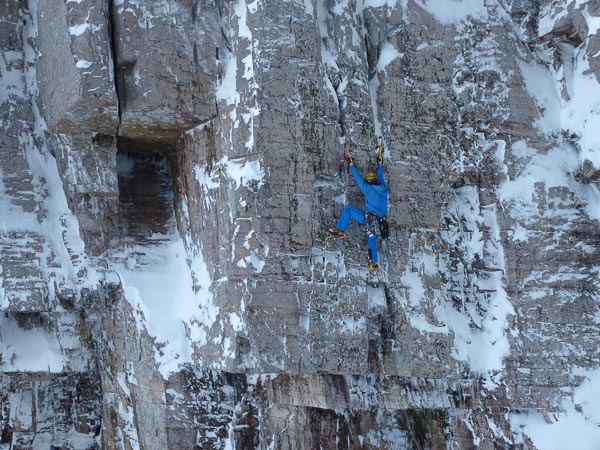 Greg Boswell on the first ascent of Making the Cut (VIII,8) on Beinn Eighe. This stupendous route climbs through stepped roofs before taking the soaring crack line to the left of West Central Gully. (Photo Nick Bullock)

The gales that raged throughout the BMC Winter Meet prompted many team to visit the North-West Highlands to seek some shelter from the South-East winds. This proved to be an unexpected bonus, as the Torridon Mountains were in excellent winter condition.

Beinn Eighe, with its high north-facing cliffs was the initial venue of choice, and the classic lines of Fuselage Gully, East Buttress, West Buttress and Central Buttress soon saw ascents. On Wednesday January 29, Will Sim and Michelle Kadatz from Canada made the fourth ascent of the fabled West Central Gully (VII,8), arguably the most difficult gully climb in Scotland. Will came back raving about the climb, mightily impressed that Mick Fowler and Mike Morrison climbed this steep route way back in 1986. Also on Wednesday, Neil Adams and Nejc Marcic (Slovenia) made a possible second ascent of second ascent of  Sting (VII,7) , Andy Inglis and Martin Zumer (Slovenia) made the third ascent of Hydroconicum (VIII,8), and Dave Almond and Michal Sabovcik (Slovakia) climbed the now classic Blood, Sweat and Frozen Tears (VIII,8).

The following day (January 30), the pace stepped up another notch when Nick Bullock, Jon Walsh (Canada) and Greg Boswell made the first ascent of Making the Cut (VIII,8), a major new line taking the soaring crack-line left of West Central Gully. Will Sim and Olov Isaksson (Sweden) also added Crazy Eyes (VII,9), another very strong line taking the left-facing corner, roof crack and offwidth corner above Hydroponicum. (The name is a tribute to Magnus Kastengren who represented Sweden at the last BMC Winter Meet and died recently after an accident when skiing on Mount Cook). Will and Olov climbed their new route so fast that they had time to nip up the classic West Buttress later that day. Andy Inglis made a return visit with Piotr Sulowski (Poland) and climbed the brilliant Sundance (VIII,8), and Simon Frost and partner made an early repeat of West Buttress Directissima (VII,8).

The last day of the week (Saturday, February 1) saw something of a North-West showdown. Beinn Eighe continued to stay popular with more ascents of Central Buttress, Shang High, Kami-kaze and another ascent of Sundance by Dave Almond and Gustav Mellgren (Sweden), but the centre of the activity transferred to Beinn Bhan where there were four teams in action in the stupendous Coire nan Fhamair. Nick Wallis and Tito Arosio (Italy) climbed Gully of the Gods (VI,6) and Adam Booth and Slovenian climbers Nejc Marcic and Martin Zumer made an early repeat of Great Overhanging Gully (VI,7). Genesis (VII,7) saw its fourth ascent in the hands of Andy Inglis and Piotr Solowski (Poland), and Will Sim and Olov Isaksson (Sweden) also made the fourth ascent of The Godfather (VIII,8).

Nearby in Coire na Poite, Neil Silver and Kenshi Imai from Japan pulled off the long-awaited second ascent of the 370m-long Realisation (VI,6). “It was a top quality route with sustained interest throughout,” Neil told me. “It’s at the top end of the grade and a harder outing than Central Buttress on Beinn Eighe.”

The easily accessible winter cliffs on Meall Gorm proved popular. Gwilym Lynn and Felix Sattelberger (Germany) added a Direct Start (IV,4) to Cobalt Buttress, and Ian Parnell and Michelle Kadatz made a variation to The Blue Lamppost taking Grade VI vegetated grooves in the lower section before finishing up the final chimney to give a good VII,8. Just to the right, Rattlesnake (V,7) also saw an ascent. Elsewhere in the Torridon area, George (III,4), Poacher’s Fall (V,5) and Headless Gully (V,5) on Liathach were climbed in good icy conditions, and further south on Fuar Tholl, Right-End Buttress (III) was enjoyed by at least two parties.

The most impressive achievement on the final day however, was the first ascent of Last Orders (VII,8) on An Teallach by Neil Adams and Kenro Nakajima (Japan). This magnificent groove-line, which cuts through the right side Major Rib, was one of the most significant routes of the week.