Posted on December 9, 2011 by Simon Richardson 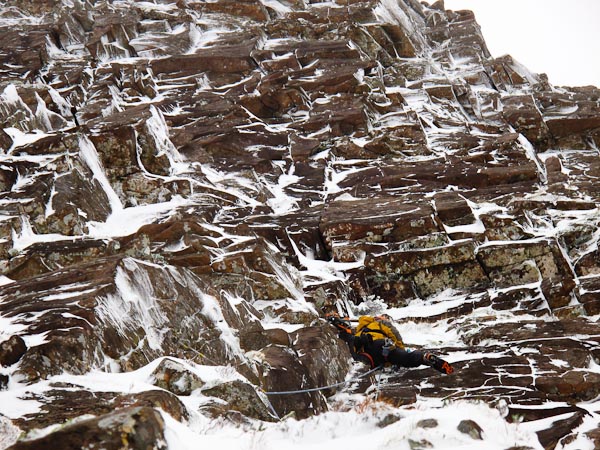 Pete Macpherson starting up the second pitch of The Blue Lamppost (VIII,8) on Meall Gorm during the first winter ascent on Wednesday. This pitch was compared to the main groove-line of Bow Direct, a VII,8 on the Fhidlheir first climbed by Macpherson and Moran with Guy Robertson two winters ago. (Photo Pete Macpherson)

Pete Macpherson and Martin Moran visited Meall Gorm in Applecross on Wednesday December 7. They thought this easily accessible, and relatively low-lying crag was the only place to go without getting blown away, but even so, Martin’s van was rocked back and forth and blasted with hail as they arrived at the bottom of the glen. But they decided to head up and have a look as Pete explains:

“There was tons of snow, and after leaving the road, the going was desperate on the short approach. We chose an HVS called The Blue Lamppost (first climbed by Gill and Andy Nisbet in September 1996) as it looked the most challenging option. Martin started with a 30m turfy groove (not great turf), which took us to the bottom of the main wall. I headed up, and climbed a cool groove to below the roof, which Martin led, taking a right-hand variation rather than the guidebook fist crack.

I led the excellent top pitch, which was sustained at technical 8. It had a desperate start up an undercut groove leading steeply up into a block-filled chimney, which felt really outrageous, but positive. Poor Martin had to second in the dark. The turf on the last two pitches was good which will give everyone an indication of conditions in the surrounding area. Overall it was a great day with lovely weather, believe it or not!

As always, the grade wasn’t easy to decide, but we settled on VIII,8.”