Posted on December 12, 2011 by Simon Richardson 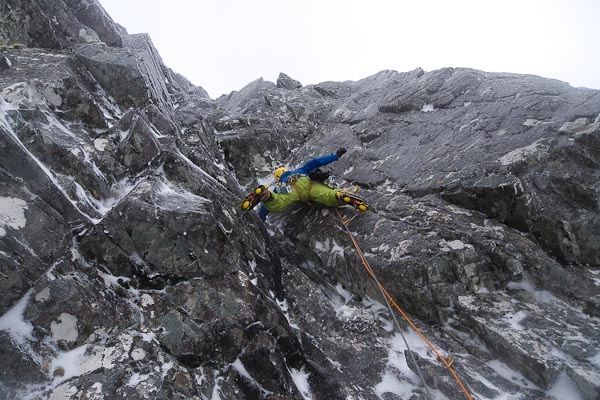 Greg Boswell on the crucial second pitch of The Knuckleduster (VIII,9) on Ben Nevis. First climbed in winter by Steve Ashworth and Blair Fyffe in February 2007, The Knuckleduster was the third in a series of Grade VIIIs on Number Three Gully Buttress (Arthur – 2004 and Sioux Wall – 2006) that heralded the arrival of a new generation of talented Scottish mixed climbers. (Photo Will Sim)

After their matter-of-fact repeat of Defenders of the Faith (IX,9) last Tuesday, Greg Boswell and Will Sim spent several days at the CIC Hut with James Dunn. Their stay coincided with last week’s great storm, but they did manage an ascent of The Great Chimney (IV,5), in the relative shelter of the east side of Tower Ridge.

Greg texted me at around lunchtime on Thursday,

“Not sure who to get in touch with. We are in the CIC Hut. The plan was to wait out the storm and then go climbing. But we just went outside to find the roof has blown off the sleeping bunkroom. I know there isn’t much anyone can do now, but I thought it best to let someone know… We’re going to walk down now.”

Whilst I phoned Robin Clothier (CIC Custodian) and Andy Nisbet (SMC President) to give them the bad news, Greg, Will and James attempted to descend, but had to retreat back to the hut. Their persistence paid off, because Friday December 9 dawned still and clear, and the trio made their way up deep snow to Number Three Gully Buttress. They climbed the complete summer line of The Knuckleduster, a summer HVS first climbed by Jimmy and Ronnie Marshall in summer 1966. The route was first climbed in winter by Steve Ashworth and Blair Fyffe in February 2007, who finished up Sioux Wall, but Boswell, Sim and Dunn stayed independent and climbed the steep final summer pitch.

“It was totally mega,” Greg told me. “And home to loads of sustained climbing with a bold and hard crux. High in the grade for VIII,9!”

For more details and pictures of the damaged CIC Hut take look at Greg and Will’s blogs.

Simon Richardson is a passionate Scottish winter climber
View all posts by Simon Richardson →
This entry was posted in Repeats and tagged Ben Nevis, Greg Boswell, James Dunn, Will Sim. Bookmark the permalink.