Posted on December 13, 2011 by Simon Richardson 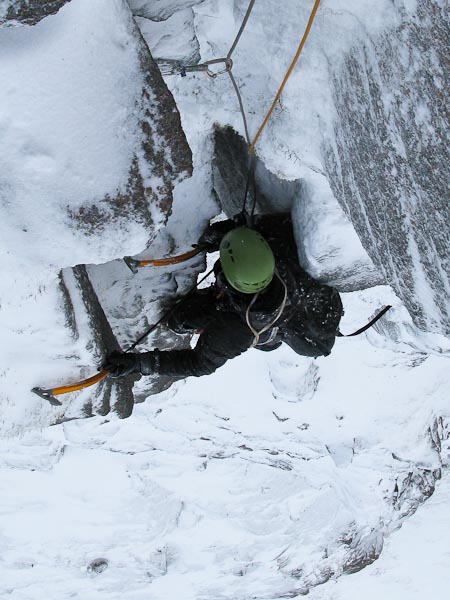 Roger Everett exiting the overhanging chimney on the first ascent of Goldilocks (VI,6) on Stacan Dubha in the Loch Avon Basin. The guide book description – “the crag has long approaches, which tends to deter most except for the hardiest of explorers and seekers of the esoteric” – means that the cliff sees few visits. (Photo Simon Richardson)

The great cliffs on the south side of the Loch Avon Basin have come into remarkably good condition for so early in the season. On the Shelter Stone, Sticil Face has had several ascents. Clach Dhian Chimney and Western Union have also been climbed, and Citadel saw a near success with a team retreating from above the upper crux.

On Carn Etchachan, the classic Scorpion has seen numerous ascents together with Nom de Plume and Guillotine, and on Hell’s Lum, Deep Cut Chimney has been climbed in very powdery conditions.

On Sunday December 11, Roger Everett and I visited Stacan Dubha, the rarely climbed cliff to the east of Carn Etchachan. We climbed the prominent line between Zigzag and Tangent, which after a couple of easier entry pitches gave three pitches of steep and sustained mixed climbing with an overhanging chimney providing the crux.

Halfway up, I asked Roger how he was feeling and he replied “Just right. I’m neither too hot, nor too cold, just like Goldilocks!” (Inveterate scientist as he is, Roger was of course referring to the recent discoveries of potentially water-bearing ‘Goldilocks Planets’ in other solar systems, rather than the children’s story!) So we called our route Goldilocks (VI,6), and conditions were just right too – dry cracks and perfectly frozen turf.