Posted on December 14, 2011 by Simon Richardson 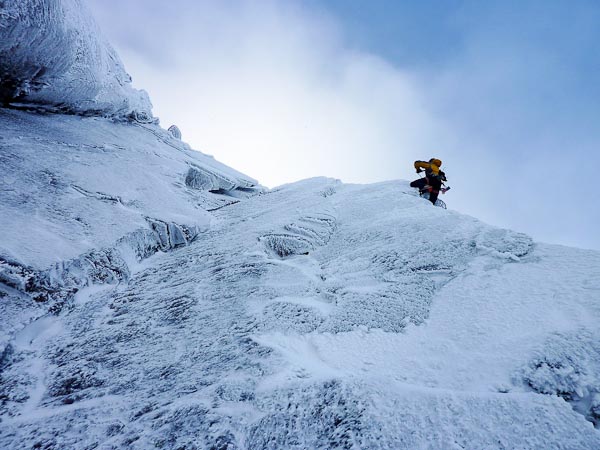 Pete Macpherson high on the crux pitch during the first ascent of Siberian Tiger in Coire an Lochain on Cairngorm. This IX,10 is based on the summer E3 Siberia, which was first climbed by Ian Taylor and Chris Forrest in the summer of 1996. This superb ascent confirms last season's promise that many cracked mountain E3s are now within the reach of the top flight of today's winter climbers. (Photo Guy Robertson)

Monday December 12 was forecast to be a good day, so fresh from his successful Ben Nevis trip, Greg Boswell texted around to ask if anyone was keen for a day out in the Cairngorms. Guy Robertson and Pete Macpherson were already planning to go to the Northern Corries, so they suggested that Greg came along as well.

Their objective was to climb a winter version of Siberia, the impressive arête between The Vicar and The Demon on No. 3 Buttress in Coire an Lochain. Guy led the first pitch trending right from The Vicar to the stance on the arête. “It was a nice warm up,” Guy told me, “and was a steady pitch of about VII,8.”

Pete then tied into the lead ropes and set off up the main arête pitch. “Siberia was Pete’s idea so he had first crack at the crux,” Guy explained. Pete got as far as the crucial roof high on the pitch and then took a monster 11m-long fall coming to rest just a couple of feet above the belayers heads. “Once he got his head together, Pete tried again, ” Guy said. “He got a little bit higher, but his psyche was pretty drained by then, and he decided to lower off.”

They pulled the ropes through, Greg tied into the sharp end, climbed up to the roof and made a series of bold and strenuous moves to reach a holdless foot ledge a long, long way above his last good protection. Greg has written an inspiring and gripping account of his lead on his blog, so I won’t attempt reproduce it here except for this quote, which for me, sums up the essence of on sighting new routes in winter.

“I balanced my way across the terrifyingly technical and tenuous slab, where at points I had no hooks and both feet were on tiny rounded smears on the boldest section. It felt like the Hurting all over again, but unlike when I climbed the Hurting, we did not know if this line/route was even climbable, as no one had ever been on it (the joys of ground up/on sighting).”

Greg eventually reached better protection and easier ground, and Siberian Tiger was born. Guy was clearly impressed. “Greg led the pitch quickly and made it look very convincing,” he told me, although Guy also stressed that Pete deserved considerable credit for laying the groundwork for the pitch.

Siberian Tiger (IX,10) is one of the most difficult Scottish winter routes to receive an on sight first ascent and is comparable in difficulty to Guy Robertson and Pete Benson’s first winter ascent of Crazy Sorrow (IX,10) on Lochnagar last season. It highlights the quantum jump in winter standards we have seen over the last couple of years, and the outstanding new talent in the shape of the young Greg Boswell. We are only two weeks into the season and Greg has already notched up two hard new routes and two significant repeats. One can only guess at what the rest of the season holds!