Year of the Horse

Posted on February 8, 2014 by Simon Richardson 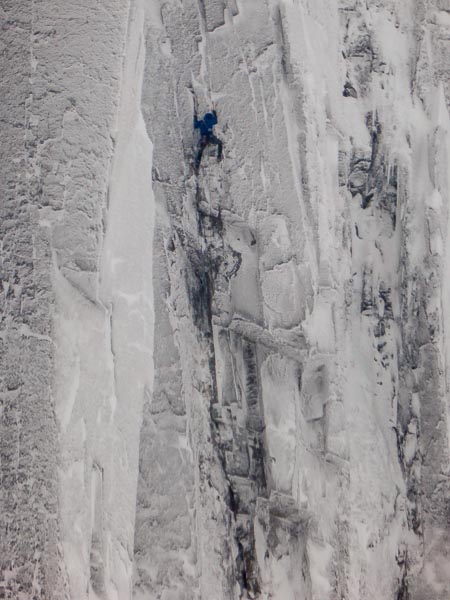 Iain Small climbing the wall above the double roofs on the first ascent of the Year of the Horse (IX,9). This is the second Grade IX that Iain has added to cliffs of Stob Coire nan Lochan in as many weeks. (Photo Richard Bentley)

On Thursday January 30, Iain Small and Blair Fyffe made a major addition to Glen Coe. “After climbing Sundance on Beinn Eighe with Murdo [Jamieson], I headed down to The Fort that evening to get out with Blair on Thursday,” Iain told me. “We hedged our bets and headed up for Stob Coire nan Lochan and a broken trail. The amount of snow is prodigious, and as we passed Central Grooves you could reach up and touch the peg (it must be 15ft up the groove normally)!

I had in mind a soaring V-groove capped with a double overhang and headwall that takes the imposing wall to the left of East Face Route. It gave a real winter-only treat of turf, dirty cracks and suspect blocks. A steep wall and grooves on the second pitch led to a large girdling ledge. We finished up the cracked wall to the right of East Face Direct Direct with my arms cramping up and blinding spindrift racing up the crag.

We called it Year of The Horse (the new Chinese Year ) and it might be IX 9. It provided a nice foil to Scansor for the style of climbing. The route was a full on winter tussle entailing plenty of physicality and even knee bars through the double roof, so different to the delicate technical walls of Scansor. Even after the roofs I was unsure of whether the wall above would go, with cramping arms and choked cracks, but a ledge was in sight and even some neve to haul onto!”