Last Orders on An Teallach

Posted on February 10, 2014 by Simon Richardson 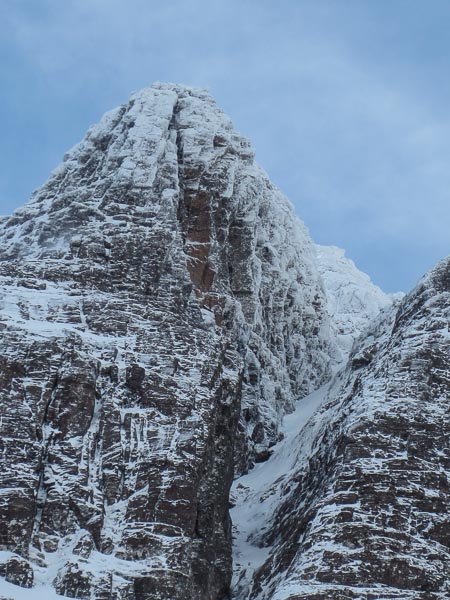 The great soaring groove of Last Orders (VII,8) cutting through the right side of Major Rib in Glas Tholl on An Teallach. This superlative line was takes one of the most compelling features in the Northern Highlands. The broad gully on the right is the Alley (II). (Photo Neil Adams)

One of the real highlights of the recent BMC Winter Meet took place on the last day (February 1) when Neil Adams and Kenro Nakajima from Japan made the first ascent of Last Orders (VII,8) on An Teallach. This striking groove line slices through the right side of Major Rib, and is characterised by a remarkably steep and monolithic section that is cut by a roof at half-height. The pair approached the route by starting about 50m up The Alley at an icy corner where The Alley curves rightwards.

“We walked in with the intention of doing Haystack,” Neil told me. “The weather was good and we spotted this obvious line that wasn’t in the guidebook. Kenro was up for an adventure, so we went for it. He put in a great lead on the crux pitch (pitch 3) to make the hard, strenuous moves up to and past the roof in fading light. He did take a short rest on gear – the first free ascent is still there for the taking – but that was at least partly due to cumulative fatigue from climbing six days in a row!”

Simon Richardson is a passionate Scottish winter climber
View all posts by Simon Richardson →
This entry was posted in New Routes and tagged An Teallach, Kenro Nakajima, Neil Adams. Bookmark the permalink.

2 Responses to Last Orders on An Teallach