Posted on February 11, 2014 by Simon Richardson 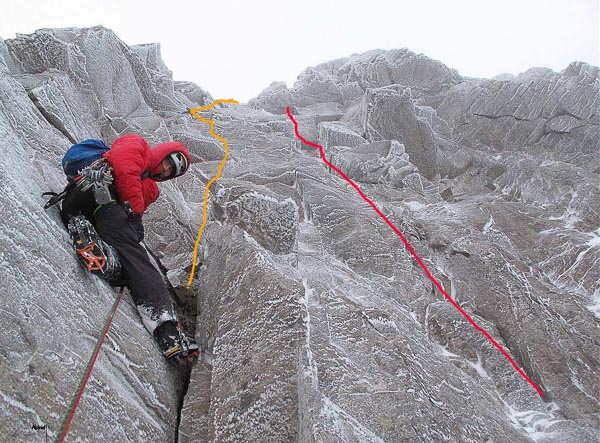 Andy Turner at the hanging belay below the final pitch of Bruised Violet on Beinn Eighe (yellow) with the top pitch of the new line Crème de Violette (IX,9) marked in red. “I spent over an hour climbing rightwards to come close to Nick’s line but was put off by the gear and ended up down climbing and then having to head up in an exhausted state on the top pitch,” Parnell recounted afterwards. (Topo Ian Parnell)

With an excellent weather forecast for the North-West on Friday January 7, Nick Bullock and Tim Neill headed up to Beinn Eighe with the intention of repeating Bruised Violet (VIII,8) on West Central Wall. Bruised Violet was the brainchild of Ian Parnell, who made four attempts before he finally succeeded with Andy Turner in March 2009. The name is a reference to the injuries sustained from an avalanche in Fuselage Gully after one of the failed attempts, and later, Ian wrote a gripping article in Alpinist describing the story of the route.

Nick and Tim’s ascent was demanding and engrossing, and after finishing the ascent Nick declared it one of the finest five winter routes he had ever climbed in Scotland. After chatting with Ian over the phone, it turned out that they hadn’t followed the original line but had taken a direct version of pitch two and then a parallel line to the right of the third pitch. The resulting new route – Crème de Violette – is solid IX,9 and another outstanding addition to the awe-inspiring West Central Wall. Crème de Violette covers similar ground to Bruised Violet, so it’s likely that Ian and Andy’s route may be a little undergraded too.

“The actual climbing shared with Bruised Violet is actually very little,” Nick explained. “After pulling through the overhang into what Ian called the committing groove, I soon reached the in-situ Pecker where Ian went hard right. I continued up the groove placing a Bulldog into ice just beneath a roof that caps the groove. Moving right around the roof to reach a steep groove above was really absorbing, especially given the lack of protection! The steep groove moves were very technical, one-tooth placements in a shallow crack while my front points were placed on very small flat edges. After the groove, the gear improved but the climbing was still sustained following a wide crack that bulged. Eventually, I reached a belay after about 40m.

The second new pitch climbed direct until beneath a bottomless corner which overhung dramatically. Pulling into this corner and climbing it to the top was the second crux of the climb. Once committed to the corner placing any more gear was impossible. At the top of the corner a few moves right using axe shaft torques in a horizontal crack led to a wide crack and a steep pull onto a snow ledge. A final overhang led to the top. I told Ian that I thought it was one of the best routes I had ever experienced in Scotland, and for me, it is certainly the route of the winter so far!”

It was a busy day on Beinn Eighe on February 7, with ascents of Eastern Promise and Blood, Sweat and Frozen Tears, and Andy Inglis and Duncan Hodgson nipped in for another early repeat of the highly-prized West Central Gully.