Posted on February 12, 2014 by Simon Richardson 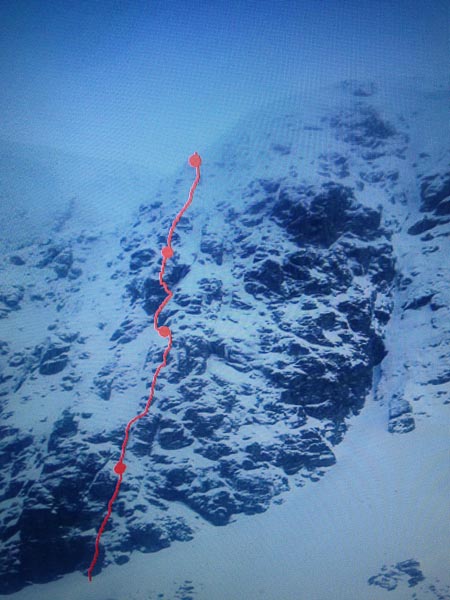 The line of Best of a Bad Bunch (VI,7) on the West Buttress on Beinn an Dothaidh. This possible new route appears to be a direct version of Stormbringer (III) and its Direct Start (V,6). (Topo Willis Morris)

Willis Morris and Euan Ryan visited the North-East Coire of Beinn an Dothaidh on January 21 with the intention of climbing the classic line of Ménage a Trois. On the approach they were deflected on to a possible new line near Stormbringer on West Buttress. They believe they climbed a harder variation start to Stormbringer Direct Start, by starting to the left, and joining it at the top of the first pitch for the overhung crux. On the second pitch, where Stormbringer continues up the ice gully, they continued up the right-hand side buttress up a groove with thin ice cover. For the third pitch they climbed five metres of the ice gully to the left, and instead of continuing up the gully-line, they went straight up and over a roof on the left wall of the gully (crux), before a fourth and final pitch up a mixed crack system led the top just left of where Stormbringer finishes.

“We’re both instructors at the Glasgow Climbing Centre,” Willis explained. “We wanted a day out after several failed attempts the previous week due to bad weather. We originally planned to travel to Glen Coe to try Central Grooves, but when this failed we decided to head for Menage a Trois. But even this failed thanks to our route finding skills. If the route is new, we’d like to call it Best of a Bad Bunch’, which seems an appropriate name in the circumstances! We realise that the route is not sustained and neither does it lie far from an existing route, but when our pitches are linked together they produce some awesome mixed climbing. We decided to grade it VI,7.”

It’s a long time since Chris Cartwright and I made the first ascent of the Direct Start of Stormbringer (November 1996), and even longer ago when Ken Crocket and Ian Fulton made the first ascent of Stormbinger itself (January 1977). I can’t remember exactly where we went, but it is likely that Willis and Euan climbed new ground. If anyone has climbed the Stormbringer recently, please feel free to comment.

Simon Richardson is a passionate Scottish winter climber
View all posts by Simon Richardson →
This entry was posted in New Routes and tagged Beinn an Dothaidh, Euan Ryan, Willis Morris. Bookmark the permalink.