Posted on February 13, 2014 by Simon Richardson 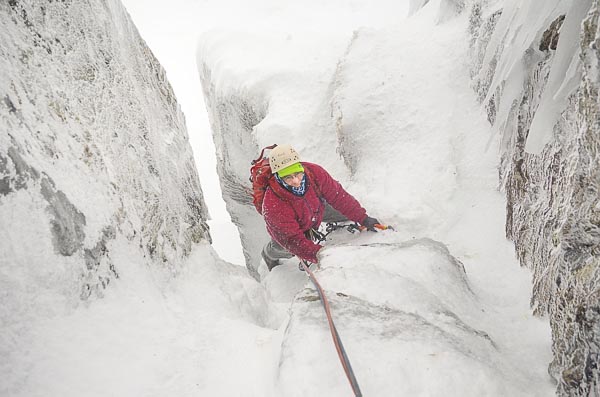 Tim Chappell on the first ascent of Freebird (V,6) on South Craig at the head of Glen Prosen. This rarely-formed ice gully is one of the most aesthetic new routes climbed in the Angus Glens in recent seasons. (Photo Henning Wackerhage)

I was delighted when I heard that Henning Wackerhage and Tim Chappell had succeeded on their long sought-after ice gully in Glen Prosen last weekend. It’s always immensely satisfying to get the conditions right on a route that needs ice to make it climbable. Henning takes up the story:

“Several years ago during one of many walks up Mayar I noted a cliff in Glen Prosen. It was South Craig and it only had one recorded route on it, Summit Gully (III), first climbed by Brian Findlay and Greg Strange in 2001. Some time afterwards I walked in with Robbie Miller and Andrew Melvin in thaw conditions and we climbed the large ledge under the overhangs and finished up the last section of Summit Gully.

More visits resulted in three more routes (a Grade III and a IV on the right-hand side of the crag and a Grade V just to the left of Summit Gully. However, our main objective, the icy corner was never in icy enough condition. On Saturday February 8, Tim Chappell and I walked in with a different plan, but this time the corner was very icy, and in addition, the South-Easterly gales had whitened the whole crag. Unfortunately we only carried two blunt ebay ice screws, which we could not screw into the ice, even whilst standing at the bottom, so we climbed the route with an ice hook as our only ice gear.

The climb itself was a neve ramp to a blade of rock in an open-book corner. At the end of the blade there was a tree trunk-sized ice column and with some back-and-footing, I managed to stand on top of the blade. Above were icicles blocking better ice behind, so I removed the icicles to uncover some good placements. This short vertical section is similar to the steep ice section on Sticil Face and was followed by easy climbing to a cave. We avoided the cave on the right and then climbed to the plateau on good neve. We named the route Freebird and graded it V,6 – good climbing in an impressive scenery but unfortunately it was over all too soon!”