Posted on February 14, 2014 by Simon Richardson 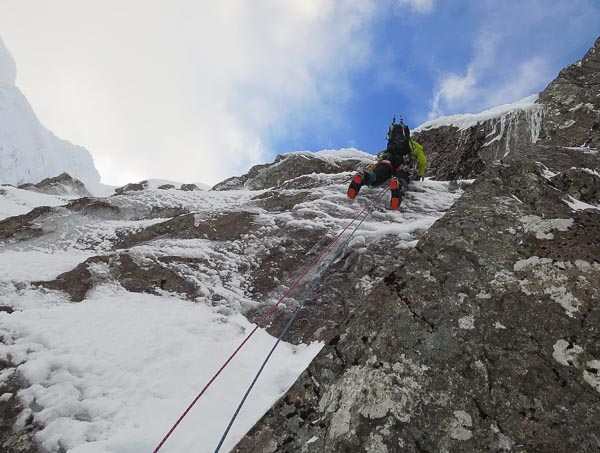 Pawel Wojdyga leading the crucial third pitch of 1944 Route (VII,7) on South Trident Buttress on Ben Nevis. This may have been the first complete ascent of the summer line. (Photo Ian Bryant)

During the BMC Winter Meet on January 28, Ian Bryant and Pawel Wojdyga from Poland made a rare winter ascent of 1944 Route on South Trident Buttress on Ben Nevis. Given the importance of the summer route (Brian Kellett made the first ascent in July 1944 during his unprecedented soloing spree of eight new routes, and the route has now become an established summer classic), it is rather surprising that the route has not seen more winter attention.

“On the second day of the Winter Meet we looked up at South Trident Buttress and wondered about a prominent groove high up on 1944 Route,” Ian told me. “Greg [Boswell] had a guidebook and could find no mention of it being climbed in winter, so we decided to give it a go. Pawel lead the groove which was thinly iced and bold – it felt like VII,7 on the day.”

It turns out that the first two pitches of 1944 Route were first climbed in winter by Graeme Livingston and Mark Charlton in 1987 during the first ascent of Eastern Block (VI,7). They did not climb the final groove and finished to the left. This groove was subsequently climbed by Dave MacLeod and Mike Tweedley as a finish to Under Fire (VII,7), which takes the wall to the right. I’ve not heard of any other ascents of the climb, so although it is unlikely that Pawel and Ian travelled any new winter terrain, their climb may be the first winter ascent of the complete summer line.

Please leave a comment if you know of any other ascents.