Stealth and Cunning in Glen Strathfarrar

Posted on February 17, 2014 by Simon Richardson 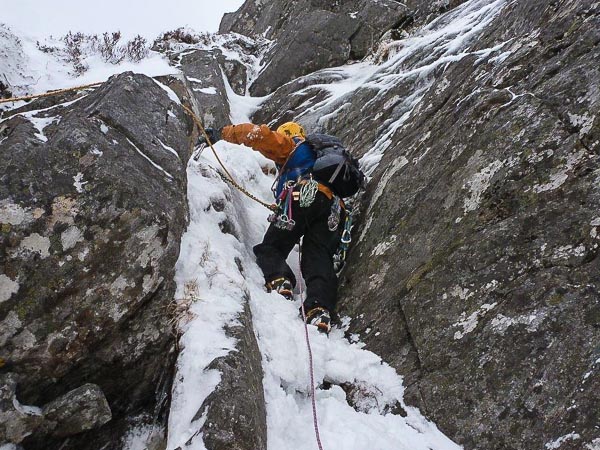 Neil Wilson on the first attempt of Hogwarts Express (IV,4) on Sgurr na Muice in Strathfarrar. “The groove looks so easy but it ain’t… we gave it a lowly grade of IV,4 as it was in relatively easy condition due to extreme cunning and the crux was only 20 to 25m long.’ (Photo John Mackenzie)

“Since everyone else seems to be reporting new routes I suppose I ought to as well,” John Mackenzie told me. “Even more so, since you told me off for not doing so at the SMC dinner! So the ‘nose’ of Sgurr na Muice in Strathfarrar seemed a good choice after prolonged South-East winds that would have stripped the looser snow. January 12 was wildish with pretty little puffy clouds hanging around the surrounding peaks but otherwise good visibility. Unfortunately, and rather obviously, the pretty little clouds that had been tinged pink at sunrise were wind-driven spindrift that we were fully exposed to – a proper January experience. The route we hoped to do went between Porker on the left and Piglet on the right and would follow a rising ramp that ended in a groove.

We, that is, were Dave Broadhead, Neil Wilson and me. Though the lower ramp went just fine, the steep groove above that looks such a doddle in the photo, was indeed very steep and consisted of nothing so much as mush with an ice cream topping. Somewhat foreshortened from where I was, I was sure Neil would whip up it, but his whipping was mainly directed at him via the groove, and somewhat disconsolate he manage to backtrack and descend a side wall to the left which brought us, eventually, onto the delightful neve of Porker and the top. Sgurr na Muice – 1, Climbers – 0.

However on the February 7 after some pretty awful weather up here and no end of snow, there was a good day forecast with light winds, so Andrew James and I staggered back up with overweight sacks to The Start, again. This time the helpful snow has been thinned to compacted soft slab that provided no purchase, but on the plus side the turf was frozen. The initial long pitch now was not so easy, and a hunt of ‘find the turf dod’ up the otherwise rocky ramp meant not so much front pointing as diddly little side steps, which took us to a very good belay.

The groove above looked as if it had a solid coating of ice or neve, but once at its foot this carapace simply fell away in plates revealing a classic joke of a 70 degree V-shaped groove with not a shred of turf, but a one-inch wide parallel crack leading to a fine turfy top. By stealth and cunning gained by extreme age, the carapace was cleared but instead of falling onto Andrew below I caught some of it between my feet and pressed it into the groove. Chiding it to be good, and stepping gently I could just stand on it without it subsiding with me.

The crack allowed one nut runner at that point, and somewhat forced into place and a little height was gained. Another repeat of the snow-stacking followed and this precarious ladder allowed another smaller nut runner to be placed, both of which are still there, such was the persuasion needed to seat them. Once a little step left was done (the first solid move), the capping turf was found to be well-frozen and allowed a dainty little ledge in the middle of nowhere to be reached. A short but steep wall on the right separated me from much easier ground but this had a wonderful, if hidden hook, and a couple of strenuous and very exposed moves led to more absolutely solid rock belays.

Of course, Andrew followed far too easily as I was expecting the snow ladder to collapse but it didn’t. He then led another long pitch on rather worrying snow but at least there was one runner in 55m, much the same as on the initial pitch, and that was a magnificent spike. The top was reached as daylight was ebbing and the spindrift beginning, but we still managed to the car without torches.

The reason for such a late start was the minor problem of discovering no crampons once at the head of the Glen. This meant going all the way back to Dingwall and then back up the long Glen, arriving at 11.20am, but it was a boon in disguise as the sun came out just as we arrived whereas the morning had been low cloud. Despite quite a few routes on the crag, Sgurr na Muice seems to have the almost uncanny ability to produce more, and unlike the neighbouring peaks, it is rarely drowned in snow.”