Posted on February 19, 2014 by Simon Richardson 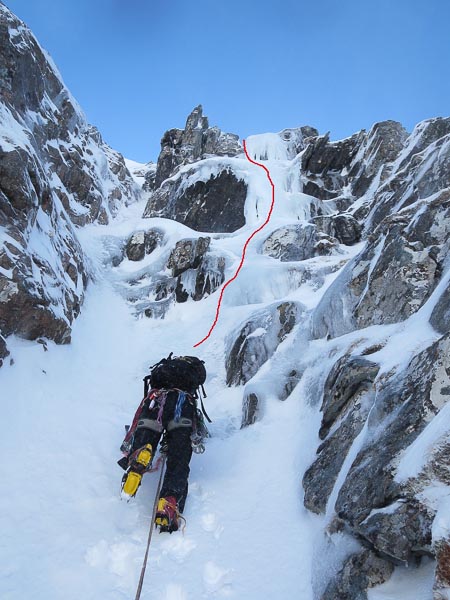 Catherine Hendrie on the second pitch of The S Word (V,5), a new ice route on the West Face of Beinn Dearg. “We told each other to not mention the ‘S’ word, because it had been snowing during the morning, and every time Cat said ‘spindrift’ we got drenched in it!” (Photo Ian Bryant)

On February 7, Ian Bryant and Catherine Hendrie added a good new route to Beinn Dearg in the Northern Highlands. “After backing off Penguin Gully as it was just horrible soft snow, we packed everything away and decided to just go for a walk towards the summit ridge, but we then spotted a good ice line,” Ian told me. “We climbed the ice in two 40m pitches (the first was about tech 5 the second about tech 4) and then continued on a meandering line to the summit ridge at around Grade III. Overall the route was about 250 metres long.”

When Ian contacted me, I was unsure whether the line had been climbed before, so I passed on the details to Andy Nisbet, who confirmed that not only was it new, but he had had his eye on it as well.

“We can’t believe little old us beat the legendary Andy Nisbet to a new route!” Ian exclaimed when he heard the news. Andy was quick with a tongue-in-cheek riposte – “Beating me to a new route isn’t that rare as I know them all!”

And to prove the point (and before he knew of Ian and Catherine’s ascent), Andy added two new routes to the West Face of Beinn Dearg himself, on February 16. Climbing solo, Andy climbed Drumcree (IV,4) the steeper grooved section of buttress between Garvachy Road and White Settlers Gully, and Redskin (II), which starts as for Drumcree up an icy step, but then trends left to reach the left-hand of three grooves.