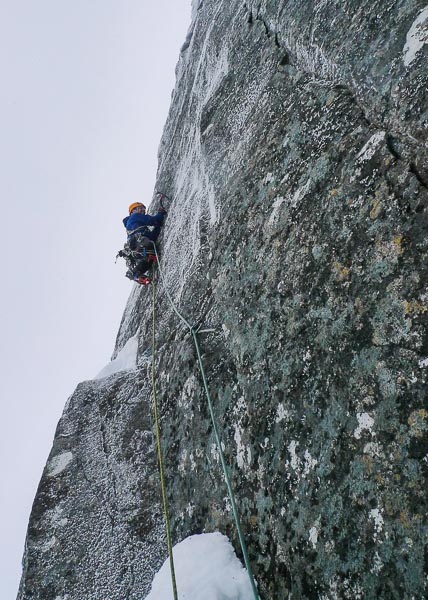 Iain Small climbing the crucial second pitch on the first winter ascent of Scansor (IX,9) on Stob Coire nan Lochan. This prominent line had seen at least four prior attempts that all came to a halt near this point. (Photo Tony Stone)

On Friday January 17, Iain Small and Tony Stone pulled off a major ascent with the first winter ascent of Scansor on Stob Coire nan Lochan. This spectacular E2 rock climb up the front face of the pillar to the right of Unicorn, has been the focus of several top teams in recent seasons, but all have been unable to unlock the technical intricacies of the bold and exposed second pitch. Iain takes up the story:

“It was a pretty dismal start with a damp mild walk and doubts over the forecast of a 900m freezing level. With the still, humid conditions and thick cloud we barely got a glimpse of the crags until we found the buttress. We were just about to give up when we hit the freezing level with fresh verglas oozing down the walls from an impressively icy crag. As the mist cleared a quick glance round into the Unicorn area confirmed we were on!

We had attempted Scansor two seasons ago, climbing the first pitch to the large block belay. Tony started up the second pitch but it wasn’t to be that day. Down climbing from an in-situ pecker from another team’s attempt, we then abbed off.

This time round we found some helpful ice in the lower grooves. The second pitch succumbed this time, with tricky-to-find gear initially, and a devious approach as to the best line to gain the traverse ledge. It even provided some reasonable neve to top out on. We then finished up the final chimney pitch of Unicorn.

All in all, it was a great technical route. Having climbed a new summer line up the front of the buttress with Tony this summer, it was fantastic to get Scansor this time around! We reckoned on IX,9 overall, as it was pretty technical on both pitches and a bold approach is required.”