Diedre of the Sorrows – Early Repeat 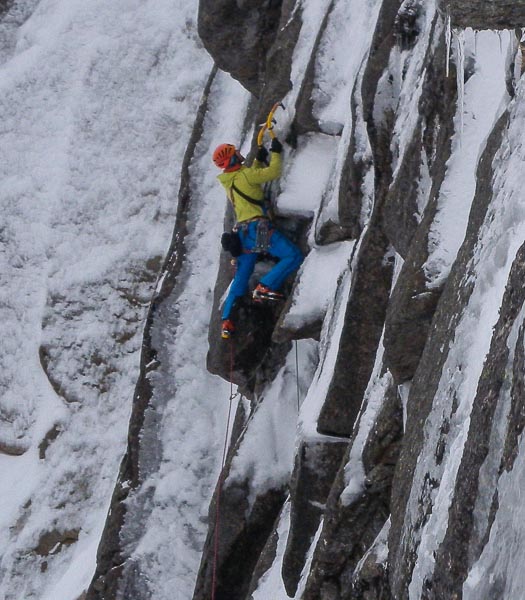 Pete Macpherson tip-toeing up the fourth ascent of Diedre of the Sorrows (VIII,8) on Lochnagar. This very sustained mixed route route was first climbed nearly 30 years ago, and throughout the 1980s and early 1990s was thought to be the hardest winter route in Scotland. (Photo Andy Inglis)

Pete Macpherson and Martin Moran added to their long list of cutting edge ascents with an ascent of Diedre of the Sorrows (VIII,8) on Lochnagar’s Tough-Brown Face on January 11. This much-celebrated route was first climbed by Dougie Dinwoodie and Andy Nisbet in March 1986, and has only seen two other repeats. On the second ascent in January 2000, Dave Hesleden and Andy Cave added a direct finish that they thought was harder than anything on the original route.

“I have real admiration for Dinwoodie and Nisbet doing this route way back in the mid-eighties and questing into the unknown’” Pete told me. “I’ve wanted to do Diedre of the Sorrows for over a decade now, but the Tough-Brown Face is so rarely in good condition that I’ve never had the chance.

I’ve been on that face three times now, twice on Nevermore, and once when I took a whipper off another new line, so I was keen to actually get to the top of something. Diedre of the Sorrows has a huge reputation for hard bold climbing in a sort of tradition kind of way, rather than a modern steep hard pulling style. There was some nice quality super thin ice on the route, but every time the angle eased, or you reached a ledge, you were met with sugary tool-ripping snow on top of bald slabs, which made for some nerve-wracking moves way above gear.

That’s the thing about this face compared to everywhere else I’ve climbed in Scotland – you dig out the back of grooves, and nine times out of ten you find nothing, no cracks no gear just an open groove. Martin made a smooth lead of the super thin and serious third pitch, and I got the direct pitch above, which Andy Cave and Dave Hesleden did on the second ascent. Six millimetre-thin ice with Peckers in an icy groove for pro focuses the mind somewhat! We did the last two pitches in the dark, which added to the adventure. All in all, a cracking day out which should keep me happy…until next time!”

Simon Richardson is a passionate Scottish winter climber
View all posts by Simon Richardson →
This entry was posted in Repeats and tagged Lochnagar, Martin Moran, Pete MacPherson. Bookmark the permalink.

One Response to Diedre of the Sorrows – Early Repeat