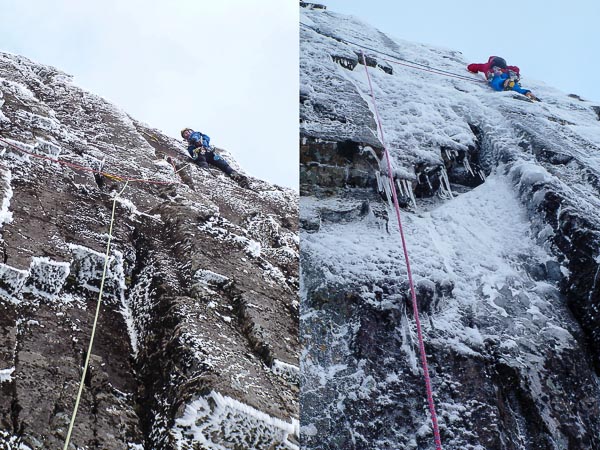 Two contrasting views of Twisted (VII,7) in Stob Coire nan Lochan. The left photo shows Malcolm Bass enjoying delicate mixed conditions on the first ascent, and the right shows Dave Almond taking advantage of useful ice at the same point on the second ascent. “Quite a bit of the first ascent was on ice too,” Malcolm commented. “We were of the belief that ice would be critical, so had waited till there was a drool at the top of the wall.” (Photos Simon Yearsley/Helen Rennard)

“Back in November Harry Holmes, Dan Tait and I went into Stob Coire nan Lochan in Glen Coe with the aim of making the second ascent of Twisted, a three-pitch three star VII,7 to the left of Chimney Route put up by Simon Yearsley and Malcolm Bass last March,” Helen Rennard writes. “However, on the day we found the bottom pitch to be bare, Chimney Route dripping and the rest of corrie disappointingly unfrozen, so we returned to the car having got up nothing.

Onto January and I was climbing with Dave Almond the weekend of January 11-12. Dave was up from Liverpool for his first trip of the winter and, as ever, was highly motivated to get out, having been training hard at White Goods since October. We were keen to avoid too much driving so opted to stay local to Fort William (where I live). I texted Simon on the Friday for his thoughts on Twisted and he replied “I’d be worried about it being black…I’d have a Plan B.” As it turned out, being too black was not an issue!

Dave did a great job leading the first pitch, remaining completely calm despite getting only three lots of gear in 30 metres. Pitch one was easily the crux, though the rest of the route maintained a high quality of (run-out!) climbing in an impressive situation. Comparing photos with Simon afterwards it was clear that Dave and I had climbed the route in contrasting conditions to the first ascent; where Simon and Malcolm had been delicately hooking on snowed-up rock, we had had usable ice for most of the route. We thought the VII,7 grade still applied for our conditions, and Dave described it as having “a tasty first pitch followed by a mellow second pitch.”

As it was, the climb was the least exciting part of the day. While we were gearing up in the foot of Twisting Gully the cornice above us collapsed. I heard a loud ‘boom’ and seconds later was being pummelled by wet heavy snow that obliterated everything around me. I was clipped into the belay, but Dave wasn’t, and I was convinced he had been swept away. After what may have been minutes, but maybe it was only seconds, the snow subsided. Then there was shouting and confusion. Below us, Adam and Dougie Russell and Steve Johnstone, who were under Chimney Route and had also been hit, were shouting up at us to check we were OK. They could see the end of one of our ropes trailing in the snow below with no one attached and thought the worst. I didn’t know what was happening and thought someone had gone, but Dave was still next to me, and Adam, Dougie and Steve were all unharmed. Cue some nervous laughter and Dave commenting that he’d have grabbed onto me as he went past if it had come to that…

And, with that, he set off up pitch one, not being a man who is easily scared. But it was certainly a lesson to be more aware of the objective dangers when winter climbing in Scotland, and I think it’s fair to say, that the five of us had a lucky escape.”