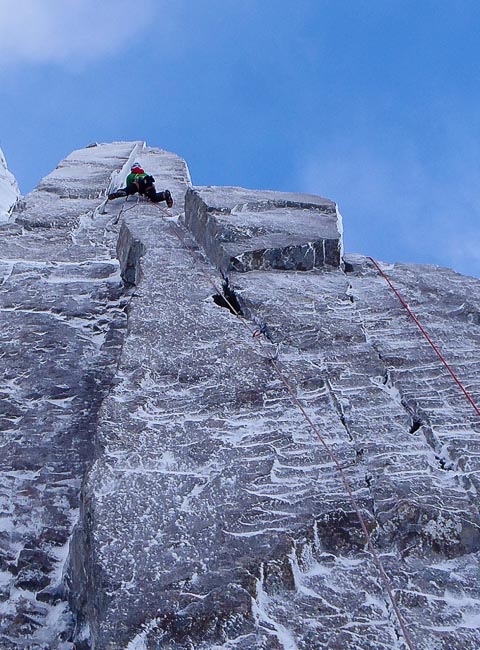 Donald King battling up the fierce crux section of Angels (VIII,9), a new route on the front face of Church Door Buttress on Bidean nam Bian. “Going climbing with Donald means I’m going to have sore arms at the end of the day!” Mike Pescod said afterwards. (Photo Mike Pescod)

Donald King, Mike Pescod and Andy Nelson made the first ascent of Angels (VIII,9), an excellent new mixed route on the front face of Church Door Buttress on Bidean nam Bian in Glen Coe on January 13. Conditions were good with light winds, and the rock was well rimed up and had quite a few bits of usable ice with clean rock underneath for placing protection. Donald takes up the story:

“The first pitch follows a line of pick-width cracks straight up the front face of the massive flake on Flake Route. The first half is very positive and good for the feet, but as I started up the top half of the pitch things got a bit more exciting! There is a 10mm wide crack running up the next section, but halfway up the footholds disappeared and I had to pull up some more protection on the rope as I needed a medium Hex. I battled with the Hex trying to get it seated, but I never got it quite right, so I also placed two cams beside it. Unfortunately, they slid out of the icy crack each time I pulled them, but it was now or never to continue up, or go down.

There was a ledge ten to twelve feet above me and the next few minutes went by in a state of fear with my hands nearly letting go of my ice axes. I think there was three or four total lock offs with nothing for my feet apart from smearing into the corner. At the ledge the crack ran out, and I only just managed to get onto it without falling and testing the gear.

Mike and Andy followed up with very tight ropes. Mike led a wee link pitch to below a groove, and then Andy led us up the groove to the Arch. My arms where still pumped by the time we got back to the car. As with many of these routes its very hard to put a grade on them, but we all thought VIII,9 is about right, but who knows?”