The Tempest On Sighted Again 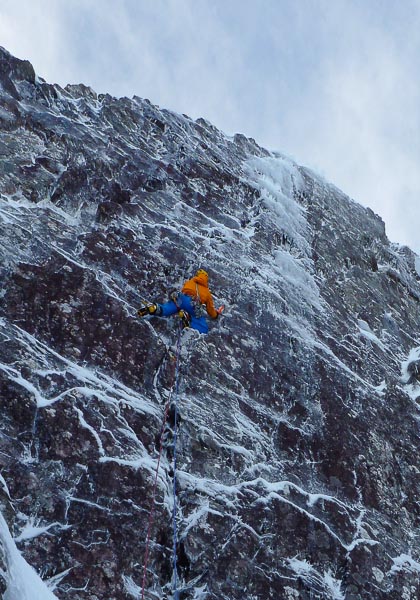 Will Sim making the second on sight lead of The Tempest (X,9) in Stob Coire nan Lochan. The Tempest was first climbed in 2001 by Neil Gresham, with pre-placed gear and graded M9. It was a deliberate attempt to raise Scottish mixed standards, but the difficult to place in-situ gear meant the style never caught on. (Photo Greg Boswell)

Greg Boswell, Will Sim, Guy Robertson and Nick Bullock visited Stob Coire nan Lochan in Glen Coe on January 13. “It turned out to be a very successful day,” Greg told me. “Guy and Nick went off and did their own thing, which turned out to be a stinking new three pitch route. [Slenderhead (VIII,8) – the thin ice seam and arête left of East Face Route]. Will and I went to look at something new early on, but were foiled by lack of protection. So we turned our sights to the Tempest. Will led off first as I had been the one on lead whilst trying our new line. He put up an awesome show of style, fight and bravery. The route was pretty icy all the way. The cracks were chocked and gear was tricky to find. His last runner that would have held any weight was just above half height, and there was some heart in mouth moments on the snowy top out when he was looking at a ground fall if his axes ripped!

By the time he had finished, the light was starting to fade, but I really wanted to climb. So Will rapped the route and I put my head torch on (just in case) and proceeded to lead the route as well. It was an awesome pitch but the second half of the route was very serious and we both agreed that the last tricky four metres were absolutely a no fall zone! It was an awesome day and everyone got some brilliant climbing done. Glen Coe delivers five star activities once again!”

The Tempest was first climbed by Neil Gresham in 2001. This 30m pitch on Summit Buttress was a landmark ascent at the time, because along with Logical Progression in Arrochar, it used pre-placed nuts and pegs for protection (but no bolts). The route was repeated in this style soon after by Innes Deans, and then ground up by Andy Turner in 2010. The first on sight ascent fell to Dave MacLeod a few days after Andy’s, so Greg Will and Greg’s repeats are the second and third on sights respectively.

But as is so usual for Scottish winter climbing, The Tempest was as much a head game, as a pure technical climbing exercise. “The icy conditions on the Tempest meant that it felt more bold than it was hard,” Will explained. “We thought that if we had fallen on the very top section we could maybe have bounced on the floor… just! I think a lot of the gear, and perhaps the in-situ pegs as well, were hidden under the thin ice, but overall it’s an amazing pitch!”

9 Responses to The Tempest On Sighted Again