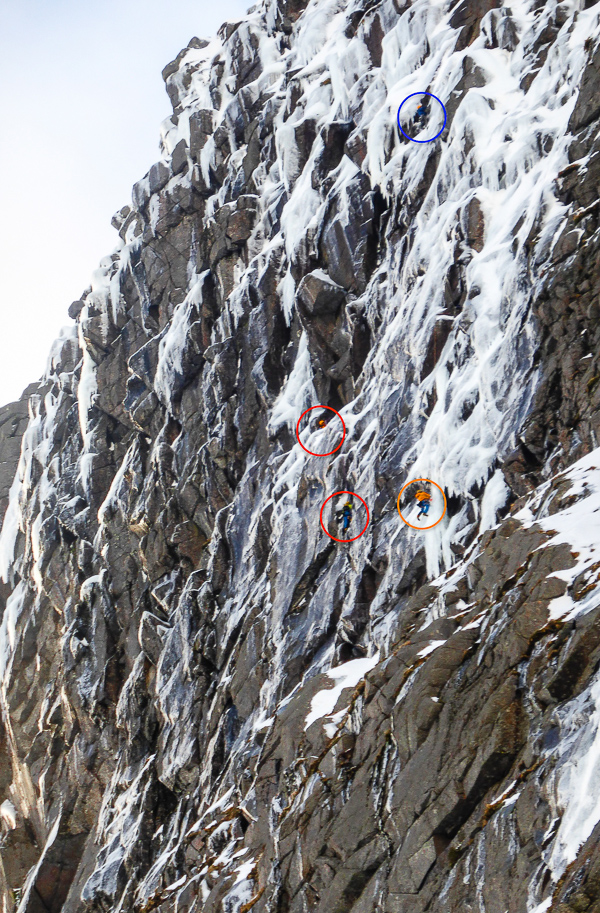 Doug Hawthorn’s extraordinary photograph showing simultaneous new routes being climbed on Creag an Dubh Loch’s Broad Terrace Wall. Guy Robertson (red) can be seen belaying Greg Boswell (red) on the first pitch of Defence of the Realm (VII,7). The route continues left and up the prominent line of hanging ice fangs. Iain Small (blue) is high above, engrossed on Hustle, a serious VII,7 that climbs the thinly iced slabs and overlaps directly below, whilst Will Sim (orange) is nearing the end of the first pitch of The Cure (VIII,8), which follows the right-slanting shadowed slot below and left. The route then traverses up and left to finish up the black slots between the previous two routes. The Sting (VII,6), the original winter route on this section of wall, takes thicker ice leading up and right, although the exact line is not known. (Photo Doug Hawthorn)

Some more details about the three new routes climbed on the right side of Broad Terrace Wall on Creag an Dubh Loch on January 11:

First up were Guy Robertson and Greg Boswell who started up the summer line of Falkenhorst (E1) to a good ledge below imposing overhangs. The summer route traverses right to break through these, but instead Guy and Greg stepped left to climb the imposing inverted staircase of ice smears. This outstanding looking route is called Defence of the Realm and was graded VII,7. The grade was confirmed the following day when it was repeated by Iain Small and Ross Cowie, followed by Doug and Uisdean Hawthorn together with Callum Johnson.

Iain Small, Doug Hawthorn and I were next on the scene and decided to climb the thin line of ice parallel and left of The Sting. Since Doug had made the first (and only) ascent of the Sting some 20 years before, he decided to pass on the route and take photos instead. Needless to say, our route succumbed to a typically bold Iain Small lead on ice that was sometimes only one or two centimetres thick. Fortunately it was the soft chewy variety, and Iain managed to place a short screw every ten metres or so. After negotiating a couple of tricky overlaps, the upper section followed the final pitches of Falkenhorst.

Iain and I thought our route (Hustle) was about VII,7, but in truth, it is impossible to say whether it is completely new. Doug cannot remember exactly where he climbed on the first ascent of The Sting, although he presumes he took the easiest line (which appears to be on the right). As far as I know, The Sting (VII,6) is unrepeated and it resisted a second ascent attempt on January 12.

With the two most obvious lines now occupied, Will Sim and Nick Bullock launched up genuine no-man’s land between the two. Will made a difficult and bold lead up an overhanging slot and overhanging flake that led to icicles just left of The Sting. Nick then traversed across the thin ice climbed by Iain and I, which led to a spectacular finish through overhanging slots to easier icy ground above.

“Nick and I have decided to call the route The Cure,” Will told me. “It’s probably about VIII,8, but really hard to grade, as there was a short very sharp hard part on the first pitch, and although the rest was not a path (maybe about VII), it was very different. We both thought the route was outrageously good, the kind of stuff that makes you laugh while you climb – too much fun to feel super hard, especially if you can levitate on thin ice like Nick can!”

2 Responses to Avoiding The Sting