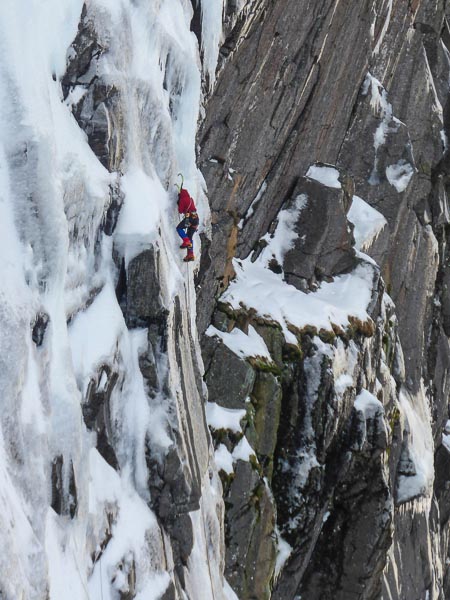 Callum Johnson teetering up the bold second pitch on the first ascent of Take the Throne (VII,6) on Creag an Dubh Loch’s Broad Terrace Wall. The hanging icicle of Sword of Damocles looms above and right and the impressive overhanging wall in the background is taken by the sought-after summer route Flodden (E6). (Photo Doug Hawthorn)

The first new route climbed on Creag an Dubh Loch’s Broad Terrace Wall on January 11 to be named is Take the Throne by Uisdean Hawthorn and Callum Johnson. This superb looking ice line takes the rib left of Sword of Damocles and is based on the summer route Mirage Variations (E1).

The highlights were Callum’s long and lonely lead of the thinly iced second pitch and Uisdean’s powering up the final up the vertical corner just left of the impressive hanging icicle of Sword of Damocles. The line was spotted by father Doug when making the second ascent of Sword of Damocles the week before, who then gracefully gifted the climb to the two young guns.

The pair initially graded the route VI,6, but after some discussion settled on a more realistic VII,6. Callum told me afterwards that it was the most difficult winter route he had climbed, and the second pitch was harder than the first pitch of The Giant which he had attempted a few days after the first ascent (but unfortunately had to descend due to a technical problem after climbing the first two pitches).

Both Uisdean and Callum are students studying in Aberdeen, and it is fantastic to see their combination of talent, enthusiasm and fitness coming to the fore. The following day (January 12) they revisited Broad Terrace Wall and nipped up the classic Bower Buttress (V,5) before repeating the Robertson-Boswell route on Broad Terrace Wall, all in an extraordinarily rapid 11-hour day car to car.

But to make the story complete, it was inevitable that Take the Throne would remain a family affair, as father Doug nipped in to make the second ascent with Iain Small today (January 13). “Absolutely brilliant” was Iain’s verdict.