And Then There Were Eight… 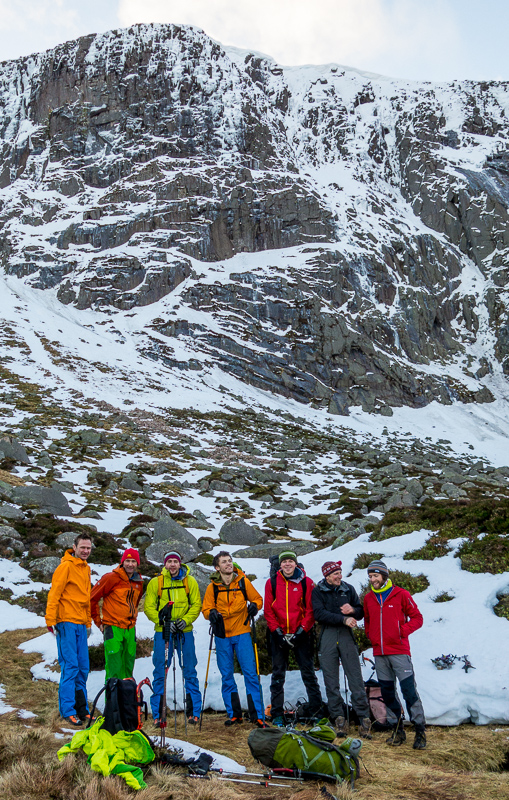 Creag an Dubh Loch’s Broad Terrace Wall is without question the steepest major cliff in the Cairngorms. It rises for 120m of sheer verticality and bewildering exposure above a steep 100m-high lower tier. Normally wet during the summer, ascents of its excellent mountain rock routes are highly prized but infrequent. In winter, it is even less travelled, and until the morning of January 11 there were only four winter routes on the wall – The Last Oasis (VI,6 Nisbet-Spinks, 1980), The Sting (VII,6 Dinwoodie-Hawthorn 1993), Sword of Damocles (VIII,9 Small-Hawthorn 2010) and Culloden (IX,9 Small-Stone-Lennox 2010). Only The Last Oasis (Hawthorn-Malcolm 1993) and Sword of Damocles (Hawthorn-Hawthorn 2014) have been repeated, meaning that the wall has only been climbed six times in winter in the last 30 years.

All this changed on January 11 when the number of winter routes on the wall doubled from four to eight. Greg Boswell and Guy Robertson approached in the dark to be first in line for the plum route – an outrageous looking line based on the first pitch of the summer E1 Falkenhorst and continuing up an inverted staircase of hanging ice smears through the overhangs above. When Iain Small and I arrived, Guy was well established on the first pitch, so we climbed a likely new line up the thin icy wall to the left of The Sting. Will Sim and Nick Bullock arrived soon after (following an aborted look at the routes on Central Gully Wall) and elected to attempt a tenuous mixed line between these two routes.

Iain and Will both made rapid progress which led to an astonishing sight of three of the best of the current crop of Scottish winter climbers (Robertson, Sim and Small) climbing parallel new lines within a few metres of each other. Further left, Uisdean Hawthorn and Callum Johnson climbed a series of ice smears (approximating to Mirage Variations), a strong Aberdeen team attempted Sword of Damocles, and Robin Clothier and Richard Bentley made the probable third winter ascent of The Last Oasis. And to cap it all, Doug Hawthorn, the man who launched this current phase of Dubh Loch activity with the first winter ascent of The Giant in December, was on hand to photograph the action.

More details to follow, once names and grades of the routes have been confirmed.

2 Responses to And Then There Were Eight…