Posted on February 14, 2010 by Simon Richardson 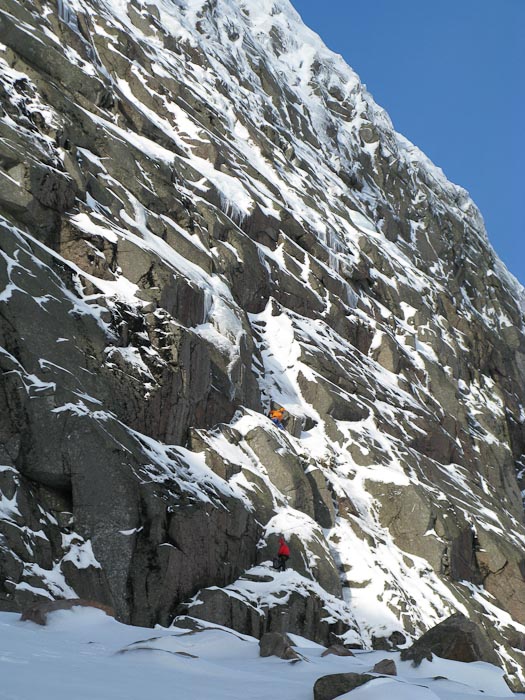 It was a fantastic day yesterday (February 13) on Creag an Dubh Loch. Big news was the first winter ascent of Sword of Damocles (VIII,9) on Broad Terrace Wall by an on-form Iain Small and Doug Hawthorn. This steep E2 chimney-line had been in the sights of several top winter climbers in recent years and had been attempted at least once before. Iain texted me to say that the crux chimney pitch was ‘very hard’ but they had useful ice on the second difficult summer pitch.

Across on Central Gully Wall, Ross Hewitt and Neil Morrison made a brave attempt on Mousetrap. This 200m-long VII,8 was last climbed in 1986, but unfortunately Ross and Neil were shut down by poor ice on pitch 5.

Meanwhile, Dave Hesleden and I made a winter ascent of Minotaur (VII,7) on the Central Slabs. We took a more direct line than the summer route and enjoyed four pitches of good well protected mixed climbing.