Posted on February 12, 2010 by Simon Richardson 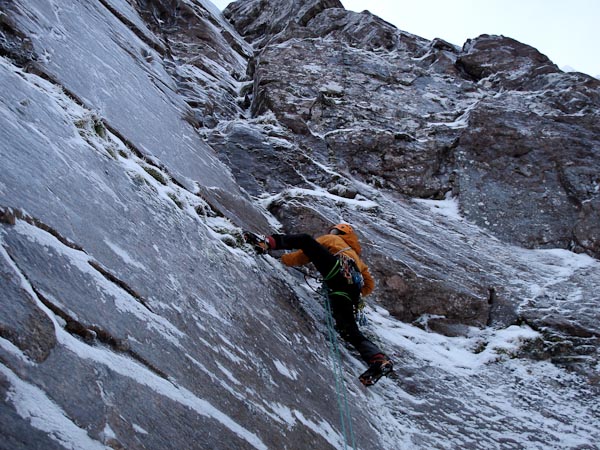 Martin Moraon on the bold first pitch of Silver Fox (VII,8), An Teallach. This sustained 90m-long route takes a line up the left side of Hayfork Gully. (Photo Pete MacPherson)

An Teallach has seen some great new additions recently. On January 21 Martin Moran and Pete MacPherson climbed The Silver Fox (VII,8), which takes the slabby wall on the left side of Hayfork Gully starting from just below the gully splits. The route sports bold and technical climbing on the first pitch and was named in memory of the well known Inverness climber Will Wilkinson who tragically lost his life in an avalanche on Ben Nevis earlier in the season.

This week in Toll an Lochain, Dave McGimpsey, John Mackenzie, Andy Nisbet and Roger Webb found Tulach Ard (V,6), a left-facing corner high on the Constabulary Couloir wall of Corrag Bhuidhe Buttress, and further right Nisbet and McGimpsey climbed a 400m-long V,5 up an icefall and series of icy grooves.