Running Scared on the Ben

Posted on February 8, 2010 by Simon Richardson 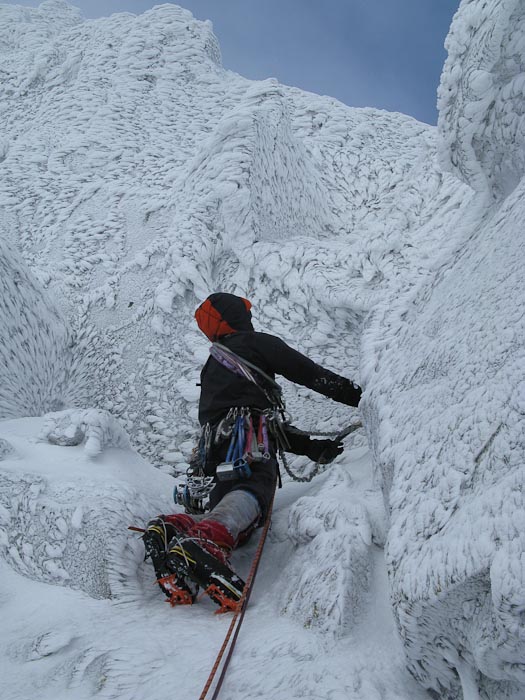 Iain Small setting off on the crux pitch of White Fright (VII,6) on the Little Brenva Face, Ben Nevis. His only runner for the next 60m was a weighted sling on a rounded spike. (Photo Simon Richardson)

Iain Small and I had an exciting time on Ben Nevis yesterday, Sunday February 7. The very steep headwall of the Little Brenva Face had intrigued us for some time so we decided to take a look.

This part of the mountain is comprised of very compact rock, but there is a line of shallow grooves running up the right side of the face left of the depression climbed by Route Major. We climbed Slalom to reach the headwall and then followed a zigzag line to gain the groove-line. We expected difficult mixed climbing and had not brought any ice screws, but conditions were tough with iced over cracks and thin ice.

During his lead of the crux second pitch on the headwall, Iain only found one poor runner. I had a similarly torrid time on the overhanging chimney above and we were both very relieved to arrive on the easier upper headwall pitch.

White Fright (VII,6) fills a surprisingly large gap on the mountain and is a fine companion route to Wall of the Winds (VI,5), that takes an easier line to the left.

In the CIC Hut we chatted to Dave MacLeod and Andy Turner who are recreating Jimmy Marshall and Robin Smith’s famous week on the Ben 50 years ago when they made six first ascents and repeated Point Five Gully. Dave and Andy had just made short work of The Great Chimney (V,6) and Pigott’s Route (V,6) and both conditions and weather look good for the rest of the week.