Three Breakfasts at Stac an Fharaidh 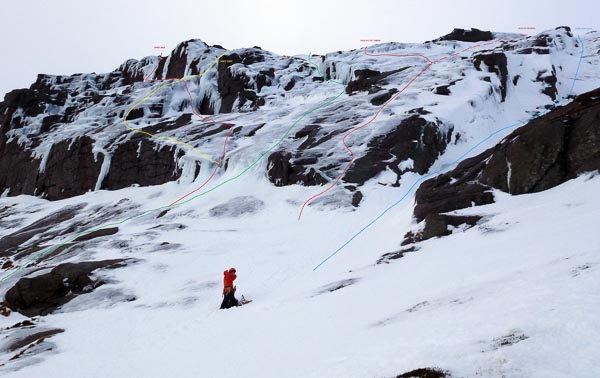 “Susan Jensen was up for the weekend and we had climbed at Lurchers Crag on the Saturday,” Andy Nisbet writes. “Now we needed somewhere for a quick hit before the weather came in on the Sunday (January 5). OK, I admit I was all for a lie-in but Susan was keen, and thank goodness in retrospect. Sneachda and Cha-No were likely to be swamped in powder so Stac an Fharaidh was chosen.

We walked in the dark and it was just light by the time we reached point 1141. Walking conditions on the plateau were amazing so we had to put on crampons immediately and reached the top of the crag very soon after, just in time for a caramel shortbread breakfast. I had never been to the crag in winter so we nipped up the line of the summer route Shielden on straightforward snow and ice (Grade II). I had heard that the area could bank out (and Allen Fyffe later confirmed it) but it suited us. Expecting the storm to arrive, we returned to the car park by 10.30am, despite going to the top of Cairn Gorm for the view (it was misty). And some parties who started later had epics.

A couple of mild days followed, then it was supposed to be colder, so Sandy Allan and I thought we’d have breakfast at Stac an Fharaidh. But it turned out to be the warmest of the three days, so the snow was on the soft side at the crag although we still wore crampons on the plateau. Susan and I had seen lots of ice on the main crag, and it was definitely thinner, but the Grade III to IV lines were still in good nick. Deja Vu was looking too thin at the bottom but Sandy was optimistic as ever, so up I went expecting detached ice on slabs. It only took one blow to know it would be good! Thin though it was, the ice was chewy and the pitch was in great nick. Partly to be different and partly to get more ice, we finished off to the left above an iced corner we thought was Apres Moi. It was technically quite easy but with not much protection and an ice screw belay, perhaps worth IV,3.

The routes here are quite short so we had time to go exploring. We walked under the base of the crag to its left end, an area I’d never seen before, and of course looking for anything unclimbed. An icy chimney looked challenging and a higher grade than the easier route hereabouts. After a while we worked out it was on the right edge of Broad Buttress. The back and knee chimney was packed with deep collapsing snow but fortunately had some cracks for protection. Above this the fault line continued and the turf gradually became more frozen but the route was about twice the length of those further right. We decided on IV,5.

I had to go to Mr Murphy, the dentist, on Thursday so it was the best day of the week. But Friday (January 10) sounded good ahead of an approaching front, so it had to be another breakfast at Stac an Fharaidh. My partners had vanished and time would be short, so I went on my own for the last two lines. I was supposed to get up early but couldn’t sleep, so got up even earlier. It was very dark and misty at 1141m so I had to get my compass, map and glasses out. My eyesight isn’t that great for night nav these days but fortunately I came across our old prints and followed them to the crag. It was still dark, which wasn’t part of the plan; walking conditions weren’t supposed to be that good. Even after descending in torchlight to the foot of the route, the light was still gloomy, but since I haven’t had a head torch on a helmet for many years, and actually didn’t know if it would stay on, I decided to put it away. There was the thought that it wouldn’t be scary if you couldn’t see down.

The line was the one Sandy and I had thought to be Apres Moi, but which Allen Fyffe had assured us it wasn’t. The start was the same but then it went straight up when Apres Moi went left. It’s such an obvious line at Grade III that maybe it’s been done before, or maybe everyone else just assumed. So I arrived at the top of the crag for breakfast. Next line was another obvious one, a big snowy groove right of Deja Vu. It steepened up to Grade II with some icy steps near the top (Lookout Gully). This time I was back to the car park at 10am, feeling a bit guilty that I hadn’t done something else.”

1 Response to Three Breakfasts at Stac an Fharaidh