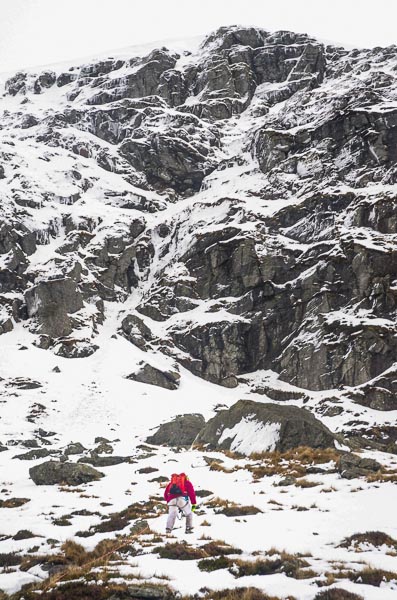 Tim Chappell approaching South Craig near the head of Glen Prosen in the Southern Cairngorms with the line of Spanish Dinner (V,6) ahead. The Angus Glens have seen something of a winter climbing renaissance in the last few seasons, and this rarely visited crag on the south flank of Mayar is home to a number of the recent additions. (Photo Henning Wackerhage)

“Glen Prosen is not often frequented by technical climbers,” states the SMC Cairngorms guide, “but high in the glen is a steep cliff, which is known as South Craig.” On Saturday January 4, Henning Wackerhage and Tim Chappell made the long walk in to see whether any snow and ice had survived the previous Friday gales.

“Lower Glen Prosen looked spring-like and we were getting used to the idea of just doing a long walk with a heavy pack,” Henning told me. “However, whilst the snow and ice had been diminished by the hair blower gale the day before, the more western aspects looked in good shape. We initially thought of doing Summit Gully, the III,5 gully climb that was first climbed by Brian Findlay and Greg Strange in 2001. However, we spotted a parallel line to the left with a steep finish, so we decided to try that.

The route was steeper than expected and comprised short technical problems with snow ramps in-between. The crux is pitch three, which is a steep, right-facing but well protected corner with some good technical climbing followed by steep snow/neve to the plateau. Comparing our three-pitch climb with other routes in the Angus Glens we thought that it was a lower end V,6, with some good but short lived technical problems and with escapable snow ramps in-between.

The route took us longer than expected and a problem arose which was that I had to make it home in time for a dinner with my Spanish lass and another Spanish guest. The walk out was therefore a mad rush down the glen to make it to the ‘Spanish Dinner’ that also gave the route its name!”