Posted on January 8, 2011 by Simon Richardson 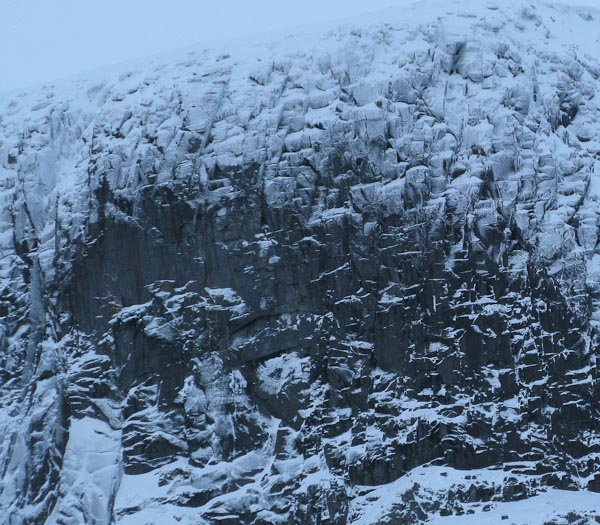 The awe-inspiring Broad Terrace Wall on Creag an Dubh Loch. This 120m-high feature is the steepest wall in the Cairngorms and home for several of the most sought-after high mountain rock climbs in Scotland. Culloden (IX,9) takes a direct line up the centre of the wall. just right of the two-tiered overhang. There are now three winter routes on the cliff. Sword of Damocles (VIII,9), takes the right-facing corner on the left side of the crag, and The Sting (VII,8) climbs cracks and corners on the far right side. (Archive Photo Simon Richardson)

Some late but very significant news – on Wednesday December 22, Iain Small, Gordon Lennox and Tony Stone made the first winter ascent of Culloden on Creag an Dubh Loch.

Culloden was first climbed by the Barley brothers in 1967 and was the first route to tackle the gently overhanging Broad Terrace Wall. It was a major breakthrough for the era and nowadays is graded E2 5c. It sees relatively few ascents because Broad Terace Wall takes a long time to dry and Culloden itself is very mossy, and virtually impossible in anything but perfectly dry conditions.

Iain, Gordon and Tony spent the night at Glas Allt and reached the foot of the climb at first light next day. Iain led the first pitch (5a in summer) and then Gordon made a brilliant lead of the crux 5c pitch. Tony then completed the route by finishing up the final 5b summer pitch, which turned out be quite bold and delicate in winter conditions.

“It was nice to climb the route as a three, and share the workload,” Ian told me. “We all found the route pretty hard. It seemed more difficult than any other VIIIs we had done so we settled on a grade of IX,9.