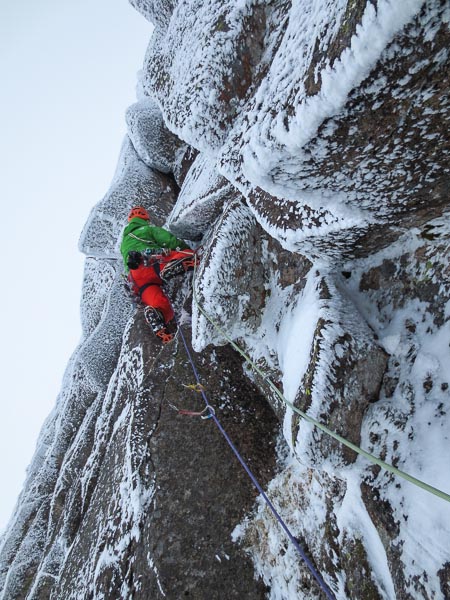 On April 8, Nick Bullock and Guy Robertson put to bed one of the last great problems on Lochnagar with the first winter ascent of Nevermore on the Tough-Brown Face. This rarely climbed summer E2 was first climbed by Dougie Dinwoodie and Bob Smith in August 1981 and takes a direct central route up the face between Post Mortem and Mort.

Pete Benson and Guy Robertson were the inspiration behind this climb. They made three attempts with Pete Macpherson, but were repeatedly turned back by the extreme difficulty of the second pitch. When Pete Benson finally succeeded on climbing this clean during their third attempt in March 2012 (a pitch thought to be worth IX,10 in its own right), they were shut down by a rapid thaw on the fifth and final pitch.

For their fourth attempt this March, Pete and Guy roped in Nick Bullock, but ferocious cold and dwindling daylight forced another retreat from high on the climb. Guy and Nick probed the fifth pitch, but both climbed back down unwilling to commit to the difficult initial roof.

On their fifth attempt on April 8, Pete was unable to join the team, but Guy and Nick were highly focused. They both knew that this was their moment, and they would either climb the route that day or not at all. Nick led the challenging second pitch leaving Guy the crucial fifth pitch. After some hesitation, Guy pulled over the roof, but on the moves above, with still no protection in place except for below the roof, he fell. With the on-sight lost, he handed over the ropes to Nick who soon passed Guy’s highpoint and pushed on into the unknown.

“The climbing difficulties above the second overlap increased,” Nick wrote later. “There was no more gear until the pitch and the angle eased. I took a long time as the technicalities were brain-ache inducing, stomach churning – the prospect of falling now slowed me – terror was the tang of battery terminals licked.” Incredibly Nick kept his cool together and a winter ascent of Nevermore was finally a reality.

“I’m astounded to get the route finally in the bag, “ Guy told me. Although Nick and Guy share the honours as the first ascensionists, they have both been quick to acknowledge that Nevermore was very much a team effort with considerable input from the two Pete’s – Benson and Macpherson.

The significance of this ascent goes far beyond Lochnagar and the Tough-Brown Face. Nevermore was graded X,10 – a significant step up from the dozen or so Grade IX first ascents that have been climbed on-sight. Of course, with the prior attempts, Nevermore was not the perfect on-sight, but although we have a handful of higher graded winter routes in Scotland, they have typically benefitted from pre-inspection, multiple attempts on the crux pitch or knowledge from summer ascents. For me, in a season that stands out for its superlatives, Nevermore is the ascent of the winter. Not only is it technically difficult, bold and committing, but it opens the door to the chilling prospect of on-sight Scottish winter Grade X.